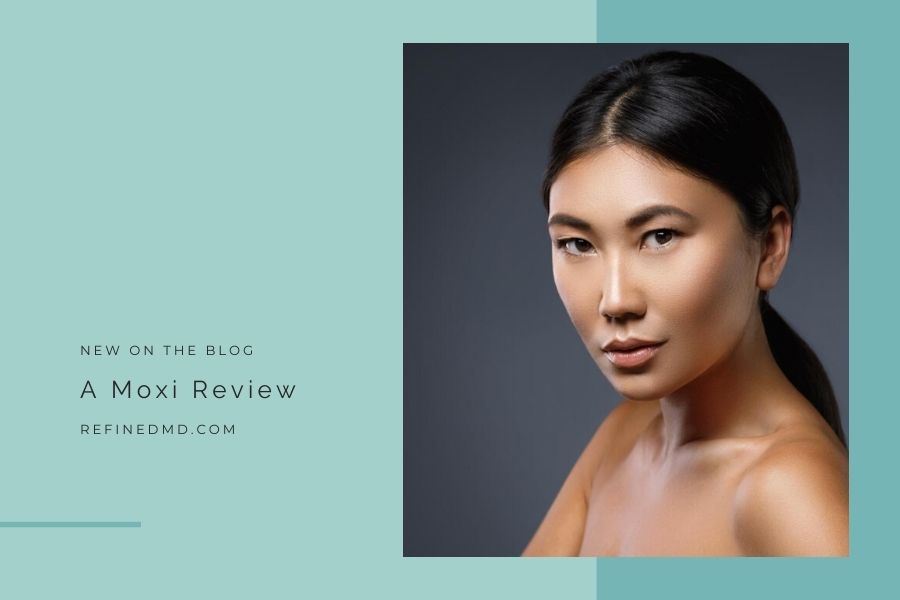 “Who What Wear” recently took a lens to the latest Moxi laser, which is used to reverse sun damage, and the review is just as glowing as the results! RefinedMD offers only the most effective and safest laser and energy-based devices, including Moxi, so you can achieve your skin goals. Marie Lodi admits that in her twenties she tanned, avoided sunscreen, and now she’s paying the price—or, rather, her cleavage is. Her chest was covered in red spots, raised white bumps, lines, and overall poor texture after more than a decade of basking in UV damage. Quick to avoid the cleavage that “looks like a peach pit” (in the words of Nora Ephron), Lodi began researching the best option for undoing her sun damage.

As an Asian woman, Lodi knew that not just any laser would do. Different skin tones and types respond differently to various treatments. BBL, a light-based therapy that can work wonders on some patients, can traditionally be tricky for Asian skin because “striping” is possible. However, the Moxi fractioned wavelength laser is different. It’s approved for all skin types and clients of all ages. A gentle laser with no downtime, Moxi is known for helping with poor tone and texture, uneven pigmentation, and is a popular “pre-juvenation” treatment to prevent the signs of aging before they begin. Moxi is also a great tool for those like Lodi who are already struggling with sun damage and are ready to do something about it. Moxi can also be paired with other lasers and energy-based devices to extend and optimize the results for more beautiful skin over time.

Where Can You Use Moxi?

Moxi can be used just about anywhere including the face, neck, chest, and even the elbows and knees. Since Moxi is a non-ablative and low-density laser designed to resurface the skin and stimulate collagen at deeper levels, there’s no need to plan for a recovery period. Lodi also completed her treatments with a customized facial using medical-grade skin care products. She underwent two Moxi treatments fairly close together, then planned her maintenance sessions 8 – 12 weeks apart. Every client plan is a little different, but Lodi’s is indicative of a common approach.

Lodi stresses that that was no prep work necessary before her treatment. She had a numbing topical applied to the chest before the Moxi treatment, which she describes as “pinpricks” with “minimal pain.” During the treatment and after, she was given a tool to blow cold air onto the chest. By the end of the treatment, she says it looked like she got a little sun—but of course, what was really happening was that Moxi removed all the sun she soaked up in years past.

According to Lodi, her Moxi treatment resulted in little bumps that were the “channels” that allowed skin care products to be delivered where they were needed the most. She says her skin felt a little hot for a while, but the feeling completely subsided 45 minutes after her treatment. The skin was red, but already visibly smoother. By days two and three, the redness was largely reduced. She took this time to up her skin care regimen and worked with an expert to get a customized plan for at-home care.

Two weeks after her treatment, Lodi said she was happy with the results of Moxi. It even reduced the visibility of a scar. However, she also says this isn’t a “one and done situation” and that she is ready for future maintenance treatments that will improve her results even more. She is also committed to sun protection going forward. It’s never too late to improve your sunscreen routine, but having a little “Moxi” along the way can help with motivation.

Ready to Get More Moxi?

Moxi has quickly gained a loyal following because of its gentle touch and no downtime. Whether you’re all about pre-juvenation or have some sun damage and lines you want to get under control, Moxi can help you get there quickly and pain-free. To learn more about Moxi or to schedule your sessions, contact RefinedMD today via the online form or call the office.