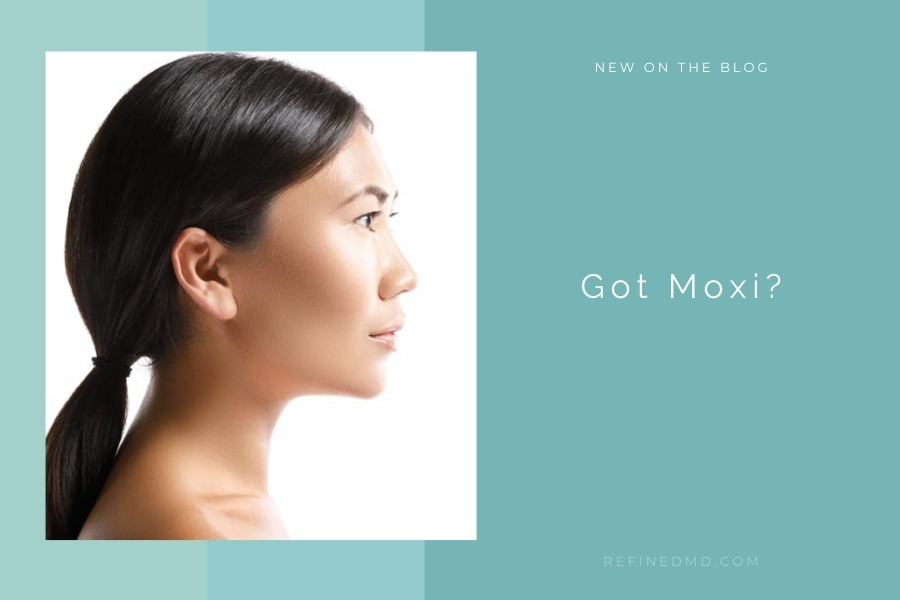 No that’s not a typo—but those with moxie often get Moxi! RefinedMD has long been dedicated to providing you with one of the largest collections of lasers and light technologies in the area, and that includes the non-ablative fractionated laser Moxi. This device turns electrical energy into light in order to target unwanted pigment. Little perforations are made in the top layer of the skin to kick-start collagen production while also improving skin tone and texture. You can reduce sun damage, brown spots, and red spots, all in a single treatment. Moxi is known for being one of the gentlest lasers available, promising a quick treatment and virtually no recovery.

Moxi can be used on all skin types, tones, and textures. There are three energy settings that ensure a fully individualized treatment plan for every client. If you want to stop signs of aging in its tracks—or reverse them—Moxi might be for you! You can also use Moxi as a supplement for more aggressive laser treatments, taking results to the next level and keeping them there longer.

The Benefits of Moxi

One of the biggest benefits of Moxi is that you can use it year-round, on all skin types, and on both men and women! That’s not always the case, since sometimes stubble can decrease the effectiveness of a laser—but that’s not the case when you go with Moxi. In multiple treatments, you’ll notice a real improvement in hyperpigmentation and texture. Moxi is a preferred “pre-juvenation” treatment to avoid signs of aging before they occur. Compared to other lasers, most clients consider Moxi one of the most comfortable, and in fact don’t even ask for numbing cream! Sessions are fast, easy, and easily fit into your lunch hour. Perhaps one of the best perks of all is that Moxi is also one of the most affordable lasers!

However, do keep in mind that Moxi is not a one and done treatment. You’ll need multiple sessions to get the best results. If you have severe signs of aging or sun damage, Moxi is not the best fit—but it can be added on to a more aggressive laser to optimize results. You’ll need no more than 30 minutes to get your Moxi on, and in half-hour sessions the Moxi delivery tip is rolled over the face, neck, chest, or anywhere else you’d like to treat. It’s often described as feeling like a prickly heat. At the end of your appointment, a topical balm is applied to the treatment site to soothe and protect the skin.

Is Moxi for You?

There might be some subtle redness after getting a Moxi treatment, but it’s largely considered a zero-downtime procedure. Skin might look sun-kissed, but that goes away in just a few hours. If you blast the AC in your car and house after your treatment, you can get rid of redness even faster. Avoid makeup, sunscreen, and other skin products for the remainder of the day, but you can go back to your daily habits the following day (except for Retin-A; you’ll want to wait 48 hours after your Moxi treatment before using those products).

Expect a rougher skin texture for up to one week after the treatment, but don’t worry. That’s just the top layer of skin getting ready to slough away. This doesn’t look like much, but you will be able to feel a rough skin texture. For those worried about aesthetics after Moxi, simply plan your treatment one week before any special event.

There’s no max when it comes to Moxi. It’s so gentle that a lot of clients use it as a monthly skin boost! Simply put, the more Moxi you get, the more corrective it becomes. It’s popular to combine with other treatments too, such as BBL, microneedling, and even laser tattoo removal. Others opt for Moxi once or twice a year to get that little boost they need to look and feel fabulous.

There are virtually no side effects, so what are you waiting for? Scheduling your Moxi treatment today at RefinedMD by starting a chat, completing the online form, or calling the office.