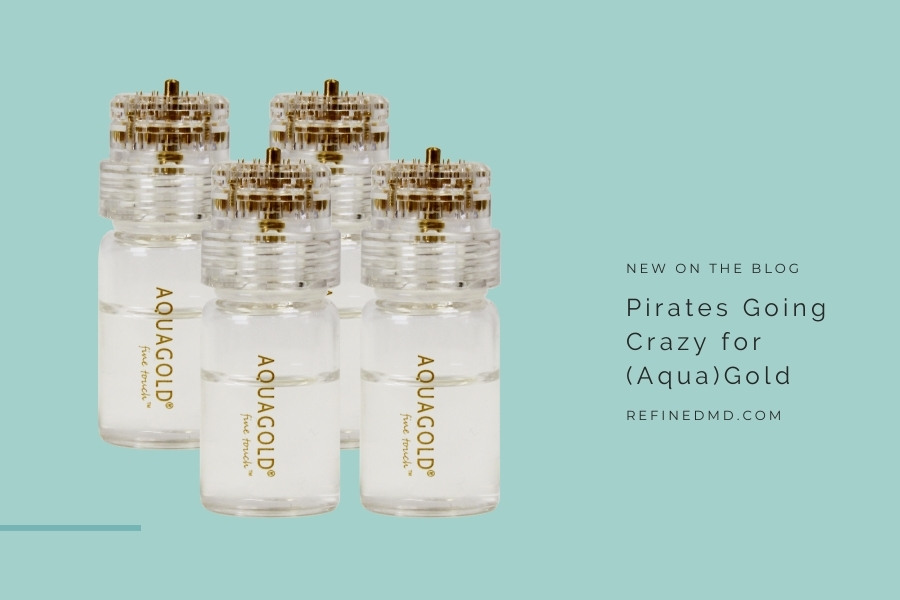 AquaGold is the unprecedented “facial” that celebrities can’t get enough of—and it’s so popular that pirated AquaGold is going wild on the black market. Just like with any minimally invasive procedure, you definitely only want to trust this treatment to be done by a professional like those at RefinedMD. AquaGold features cutting-edge technology in a high-tech device that gives you up to 2,000 micro-injections per minute via hollow, tiny needles. Injections of what, exactly? Well, that’s up to you, your provider, and your skin.

AquaGold is the next generation of microneedling. Instead of traditional microneedling that simply creates micro-traumas in the skin to encourage collagen production, AquaGold simultaneously delivers medical-grade products into the skin with those minute needles. Since the AquaGold treatment is so fast, it’s more like a stamping than individual injections and is often described as feeling like microdermabrasion. Plus, with each needle being thinner than a strand of hair and made of 24k gold, it’s a real luxury treatment.

Some of the most popular ingredients to be put in AquaGold needles include Botox, fillers, hyaluronic acid, and vitamins. If you’re struggling with aging skin that’s starting to look crepe-like, AquaGold can complement or even replace fillers. Traditional dermal fillers go too deep to actually affect the skin’s texture, but AquaGold needles penetrate just 0.6 mm deep to actually plump up the skin (not just what’s below the skin’s surface).

AquaGold will make skin a bit blotchy for the rest of the day, so don’t undergo this treatment the day of a big event. However, you’ll be back to normal the next day while the treatment gets to work below the surface. Six hours after your session, a little aftercare is required. Crystals applied to the skin will need to be brushed off and a cold splash of water can be used to soothe the skin. Most people get optimal results with three treatments spaced four weeks apart. Then, maintenance sessions every three months helps sustain results that will blow your mind. It’s no wonder AquaGold is being pirated like crazy.

Your Seoul for AquaGold

South Korea has long been known as the skin care capital of the world, and clients flock to clinics for AquaGold. However, some in Seoul noticed AquaGold being sold by what appeared to be a legit company. It turns out that the company BioMed has been creating and selling counterfeit AquaGold products. Police seized the products at the BioMed booth during the annual KIMES convention. Authorities are currently investigating the CEO of BioMed, Eum Nyun Shik (aka Corea Eum), who was finally brought into the station recently two years after the initial seizure.

The fake product created by BioMed was designed to look nearly identical to the real AquaGold packaging (bear in mind that only medical professionals can legally purchase AquaGold technology in the United States). Not only did BioMed fake the product, but also falsely claimed to be the original creator of the famed technology. Curiously, the company simultaneously lied about being the “contract manufacturer” for AquaGold (which would inherently suggest they are not the creator after all).

The Danger of Fake Microneedling

Any counterfeit product, particularly a minimally invasive one that uses needles, can cause serious damage to consumers. Before the fake products were taken by police, BioMed was awarded millions of dollars from the government as well as taxpayers to push its products online and at conventions. It’s too soon to tell what outcome this investigation will yield, but we’re happy to know that at least one AquaGold fake has been taken off the market.

If you’re interested in AquaGold, it’s pretty easy to ensure what you’re getting is safe, effective, and legitimate: only get AquaGold injected by your trusted medical day spa. This product should never be bought or self-administered. There is no news coverage about fake AquaGold in the US, but keep an eye out for any counterfeit products. AquaGold is not sold online nor directly to consumers.

If you’d like to experience the Midas touch for yourself, schedule a consultation or appointment today. AquaGold can be used on men and women of all ages and on all skin types. Plus, since our skin is an organ and can change quickly, you might find different products are recommended with each session, making every appointment unique. Get in touch with RefinedMD today by calling the office or filling out the online contact form.