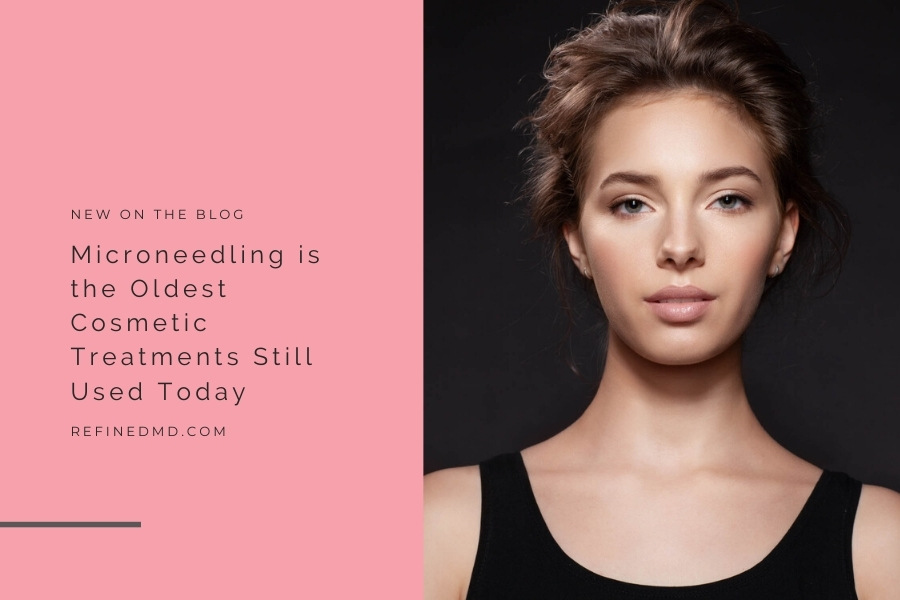 In the grand scheme of things, most treatments are relatively new—except for microneedling. The science behind this favored treatment dates back to the turn of the last century. Of course, many innovations have been made to how we microneedle since then, but the basic foundation is the same: microneedling is a form of collagen induction therapy, which harnesses the body’s own healing powers to rejuvenate the skin. It has long been one of the most in-demand procedures at RefinedMD, both as a standalone treatment and as an add-on to many other treatments.

Technically, you could also say “facials” and “chemical peels” are also well-established, being even hundreds or thousands of years old. However, facials and chemical peels are quite subjective. After all, a “facial” by definition is a topical applied to the face. The facials of today are nothing like what Cleopatra used. Chemical peels are similar, as they are chemical concoctions applied to the skin (usually the face) to peel away the top layers. Lemon juice was used in ancient times, but as you can imagine it is effective but very harsh. Only microneedling is similar in many ways to how it was originally invented, although the initial intention was to treat serious scars.

For years, microneedling was pretty basic. A specialized tool creates thousands of micro-channels in the skin, also known as micro-traumas. This kick-starts both blood circulation and collagen synthesis at the treatment site. The effects are not immediate, so patience really is a virtue here. However, you’ll start to see some results about one month after the first treatment. Microneedling can be used often, but is best used as a maintenance treatment every 4 – 6 weeks. Many celebs swear by routine microneedling treatments, and even though it’s creating a lot of injuries, it’s gentle enough to be paired in the same appointment with other procedures.

However, microneedling today is rarely “just” making those micro-injuries. Since microneedling is penetrating the skin, it really preps it to best receive medical-grade skin care products. Combining microneedling with an in-office facial—one that actually uses medical-grade products and not an OTC facial you apply at home—gives you optimum benefits for both treatments. When skin is freshly microneedled, topicals can really delve into deeper parts of your skin to work their magic.

However, microneedling isn’t exactly an exfoliant in the traditional sense. It’s not very good at getting rid of surface debris and dead skin cells. Remember, this is a treatment that works from the inside out. If you’re thinking about combining microneedling with a facial, you might want to start your session with dermaplaning. This is a treatment that uses a medical-grade scalpel to remove both the peach fuzz and debris (including dead skin cells) from the very top layer of the skin. This will further allow topicals (which should be the last layer of treatment) to get where they need to go.

What History Teaches Us

Some treatments are just meant to last. Consider CoolSculpting, which isn’t nearly as old as microneedling, but is on a similar path. The tech for CoolSculpting was discovered in the 1970s. The longer any procedure has been around, the better the safety and effectiveness can be proven. Microneedling may have began as a medical dermatological treatment, but has since grown to be considered largely cosmetic one. It worked, it uses your own body to heal, and it’s safe enough to use on a monthly basis. No matter your skin woes, you can count on microneedling to help whether it’s skin laxity, wrinkles, lines, or dullness and poor texture.

If you’ve been thinking about microneedling, now is the time to start. You’ll be able to enjoy full results by summer when you schedule your initial series right now. And if you’ve had microneedling before but it’s been a minute? You’ll be amazed at how the treatment has evolved in recent years. This isn’t like any microneedling you’ve had before, especially when we work together to create an action plan just for you and your skin.

Microneedling requires zero prep and virtually no downtime, though it can be common to be a bit red right after the treatment. If you’re thinking about microneedling for a special event, schedule it one week in advance of the big day (but know that healing is typically much faster). You’ll be able to get right back to your daily tasks after your treatment as well as apply your usual topical products (including makeup). Schedule your consult or appointment for microneedling with RefinedMD today by calling the office, starting an online chat if it’s during business hours, or completing the online form.