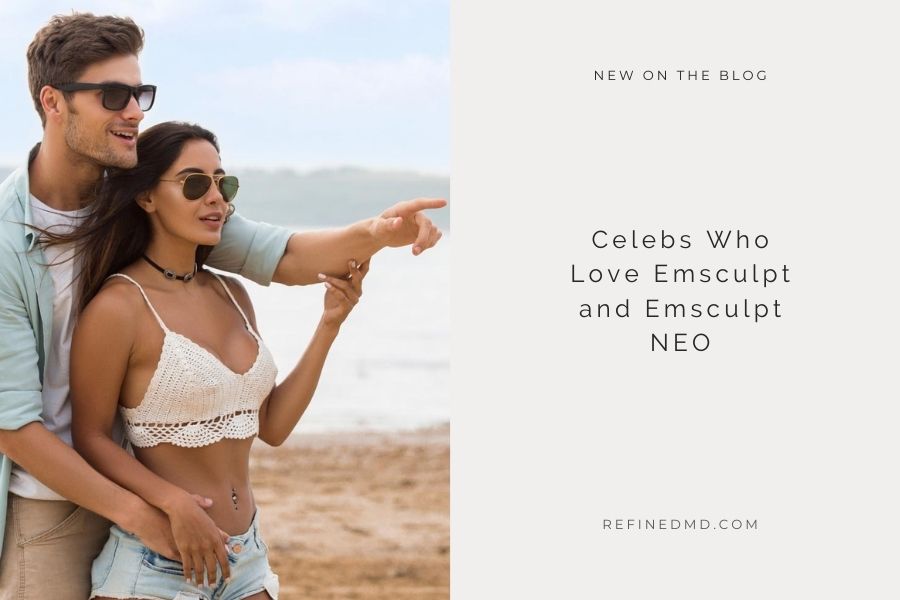 Posted at 05:00h in Emsculpt Body Toning, Emtone by dev

Gone are the days when the best cosmetic technology was reserved for A-listers. RefinedMD offers Emsculpt, Emsculpt NEO, and Emtone—all of which are beloved by celebrities because the tech simply works. Emsculpt was the original treatment that forced targeted muscles into 20,000 supramaximal contractions in just 30 minutes per treatment site. It’s identical to performing 20,000 crunches, bicep curls, or lunges, but even better. Unlike old-fashioned workouts, there are zero risks and no effort required. Plus, it’s impossible for anyone to undertake 20,000 flawless workout moves consecutively, let alone in 30 minutes. In other words, the first generation of Emsculpt allows you to achieve the impossible.

Emsculpt NEO is the next iteration of Emsculpt and takes your workout to the next level. It builds muscle just like the original, but with the added benefit of radiofrequency technology to burn fat at the same time. When fat is literally “burned” in this manner, it’s gone for good. While Emsculpt NEO isn’t a fat loss device, it is phenomenal for toning and sculpting, both of which are a must if you want to actually show off the muscle you just built. Emtone is one of the latest devices from the same company and is making waves for its ability to decrease the appearance of cellulite while simultaneously improving skin laxity. There are other cellulite treatments available, but Emtone is completely non-invasive and has the added bonus of tightening skin, too.

A number of celebrities have shared photos and videos of themselves undergoing Emsculpt NEO and other complementary devices. Since Emsculpt NEO gives you a double whammy of results, it’s no wonder it’s a favorite among the Hollywood elite. Whether you want to look red-carpet ready, give yourself some leverage as you get back into a gym routine, or want to get a head start on looking your best this swimsuit season, Emsculpt NEO can help. Kim Kardashian was seen getting the treatment on her abs in Season 17, Episode 3 of Keeping Up with the Kardashians where she said, “It feels like you’re doing stomach crunches, but you’re not. I’m into it.”

Cary Deuber shared her own experience on Instagram. The Real Housewives of Dallas star loves Emsculpt for herself but also recommends it to patients at her work as a Certified Registered Nurse First Assistant. “Talk about wow factor!” she said when she posted a comparison of her abs and backside before and after Emsculpt. One of the other Housewives, Kim Zolciak-Biermann, posted about Emsculpt on Snapchat as she received treatment on her derriere. She shared more details about the procedure, like how it goes seven centimeters into muscle tissue—and how the tech behind Emsculpt was created by Elon Musk. She opted for Emsculpt on her abs not only for the results but also to help with back pain. In fact, Emsculpt is increasingly being “prescribed” for those recovering from certain injuries and as part of physical therapy. A strong core is critical for everyone and can be a great means of alleviating back pain.

What Celebs Say About Emsculpt

Lisa Rinna joined her fellow Housewives in sharing her experience with Emsculpt when she posted a video of her receiving treatment on her stomach. According to Rinna, “I’m obsessed. I love it! My body’s morphing into a 21-year-old’s body.” She’s in her 50s but is known for maintaining a youthful aesthetic. Rinna is also quick to share her “secrets” with her fans, and Emsculpt is definitely one of her favorites.

Drew Barrymore is also a fan of Emsculpt—so much so that she’s one of its spokespersons. She has always been open about her Emsculpt treatments and shared a video where she talks about “being capable and a strong woman.” That’s definitely the kind of attitude Emsculpt can help you attain, and for Barrymore, she says she chose Emsculpt because it allowed her to work out regularly without a high risk of injury. After giving birth, she says, “My body isn’t the same after having two kids, and even just on a functional level if I would try to work out, I kept injuring myself.”

Ready to try Emsculpt, Emsculpt NEO, or Emtone out for yourself? Call RefinedMD today or complete the online form to request your appointment.