You signed up for that body toning class at your gym, but 45 minutes into lifting dumbbells to remixed songs and you already know this isn’t going to cut it. Maybe it’s genetics or workout plateaus. Refined Dermatology only features procedures that actually work, including the latest addition—Emsculpt. As a revolutionary body toning technology, Emsculpt is ideal for building muscle the abs, booty, thighs, arms, and calves. Learn more about Refined Dermatology in Los Gatos, see reviews, and be sure to give our office a call to find out more about how body toning can work for you – (408) 688-2082.

When you work out, the micro tears in the targeted muscles rebuild and in this process, your body burns fat. Unfortunately, even the best workout routine cannot stimulate and encourage supramaximal contractions in the majority of the fibers in the muscles. Until Emsculpt!

The HIFEM (high-intensity focused electromagnetic) technology works out all fibers of the targeted muscles to contract without the tearing the muscle. You’ll experience 20,000 contractions in one treatment. Afterward, there will be minor muscle soreness. After all, it’s still a workout! The difference is its one you can truly indulge in without any sweat, effort, or need of lifting gloves. 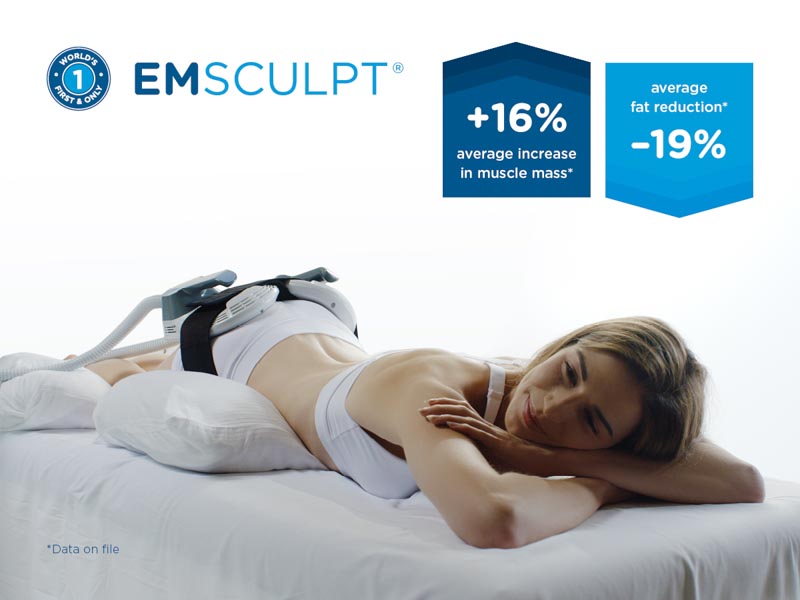 The market is flooded with options to reduce fat, many of which we offer at Refined Dermatology, but Emsculpt is the only technology that treats the muscles. Our bodies are 40% muscle. Until now, no other treatments are focused on improving muscle growth and reducing fat. Emsculpt is perfect for your booty, stomach, thighs, arms, and calves (or is it calfs?). Sorry guys, this treatment is not able to be used on your chest. Your super hero pecs are up to you.

Of course individual results may vary from patient to patient, that’s why we invite you to learn more about the Science behind Emsculpt.

Emsculpt is Ideal For Abs, Booty, Thighs, Arms, and Calves

The stomach is one of the hardest places to eliminate fat. Emsculpt targets your abs and builds muscle while burning the stubborn fat and diet-resistant fat. Emsculpt was shown in seven independent studies to reduce localized fat deposits on the abdomen by 20 percent* on average while increasing muscle mass, and thickness by 15 percent. Emsculpt will reveal your abs like never before. You may be tempted to try your washboard abs to clean your next load of dirty clothes, but we still recommend using your washer for laundry.

Sir Mix-A-Lot rapped it best – “I like big butts and I cannot lie.” For a long time the only treatment to enhance the backend was with a Brazilian butt lift, which is surgery. Emsculpt is a non-invasion solution that places technology on both sides of the buttock. During the 30 minute treatment, different pulsations of the electromagnetic waves cause a variety of Supramaximal contractions. The muscle stimulation builds muscle to lift your glutes and add volume without surgery. There’s no need to go under the knife with the Emsculpt.

That might be a bit of an overstatement, but gone are the days when a bigger, toned booty was all you needed to look and feel your best. Matching the thighs to the booty is key to a strong natural look. Men and women alike can achieve the ultimate look of health, strength, and vitality with shapely thighs that look fantastic whether you’re going to the gym or on date night. Fill out those yoga pants, cycling shorts, or skinny jeans just right when you opt for Emsculpt and enjoy the thigh life.

Carve Out the Calves

Calf implants are an increasingly popular cosmetic surgery, especially for men, but why risk surgery when you can get larger, toned calves naturally? Shapely and strong calves are the ultimate sign that you care about a balanced esthetic. However, unlike the larger thigh muscles, calf muscles can be a little tougher to tone unless you want to spend hours in spin class. Emsculpt for the calves can give you that taut, hypertrophic look you want and you’ll never be accused of skipping leg day again.

Emsculpt Has You Up in Arms

Bicep curls have been a standard—and often dreaded—part of any lifting regimen for decades. However, the biceps are just one of many muscles in the arm that need to be toned and strengthened to get that chiseled look you desire. If you’ve spent hours in the gym trying to get “cut” so you can feel confident in tank tops or strapless dresses, Emsculpt has the answer for you. Get the equivalent of 20,000 bicep curls or triceps dips in just 30 minutes with no sweat and no risk of injury.

The Science Behind Emsculpt

Can Emsculpt really give you the same results as those seen from 20,000 squats, crunches, bicep curls, calf lifts, and other key exercises in just 30 minutes without you having to do a single thing? The answer is yes—and there’s plenty of research to back it up. Emsculpt is a relatively new innovation, but there have already been 13 clinical studies performed that support this muscle-toning and fat-reducing treatment. Emsculpt uses high-intensity focused electromagnetic (HIFE) technology to force targeted muscles into 20,000 supramaximal contractions, similar to how muscles contract when you strength-train. One study in the Journal of Aesthetic & Reconstructive Surgery showed that of 21 women who underwent 4 Emsculpt sessions in their glutes, the majority enjoyed esthetic improvements in the volume and shape of their backside, with less muscle laxity and the look of a “lifted” derriere.

Emsculpt also reduces unwanted subcutaneous fat, the deepest level of fat, further enhancing the look of toned muscles. In a study in the American Society for Dermatological Surgery, researchers used ultrasound to track and measure subcutaneous fat in four areas before and after Emsculpt sessions. In total, 33 participants opted for 4 Emsculpt sessions on their abs. There was “significant” reduction in abdominal subcutaneous fat, averaging a 19% loss one month after the last treatment and 23.3% three months after the final treatment. The participants reported no discomfort and the vast majority were happy with their results. According to the researchers, based on the ultrasound results and photos, Emsculpt is effective and a non-invasive way to banish unwanted subcutaneous fat. 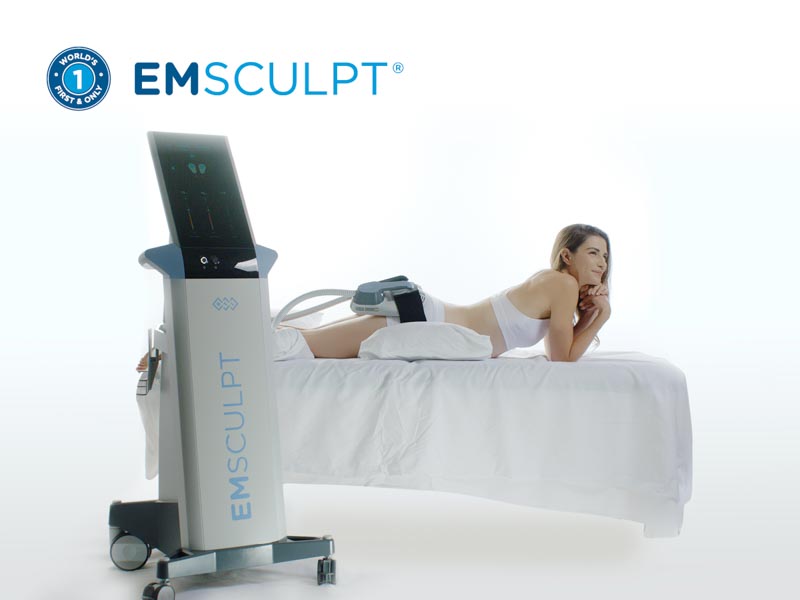 Avid gym-goers are falling for Emsculpt because it’s a great way to get over muscle-building plateaus and complements workouts well. Have a pinchable area of stubborn fat? No worries! With CoolSculpting and our full suite of fat reduction treatments, we can contour your body. Learn more about complementary treatments and procedures by talking with our highly qualified team. So, are you ready to lose fat and build muscle with zero effort? Call Refined Dermatology at (408) 688-2082 and schedule your complimentary consultation.