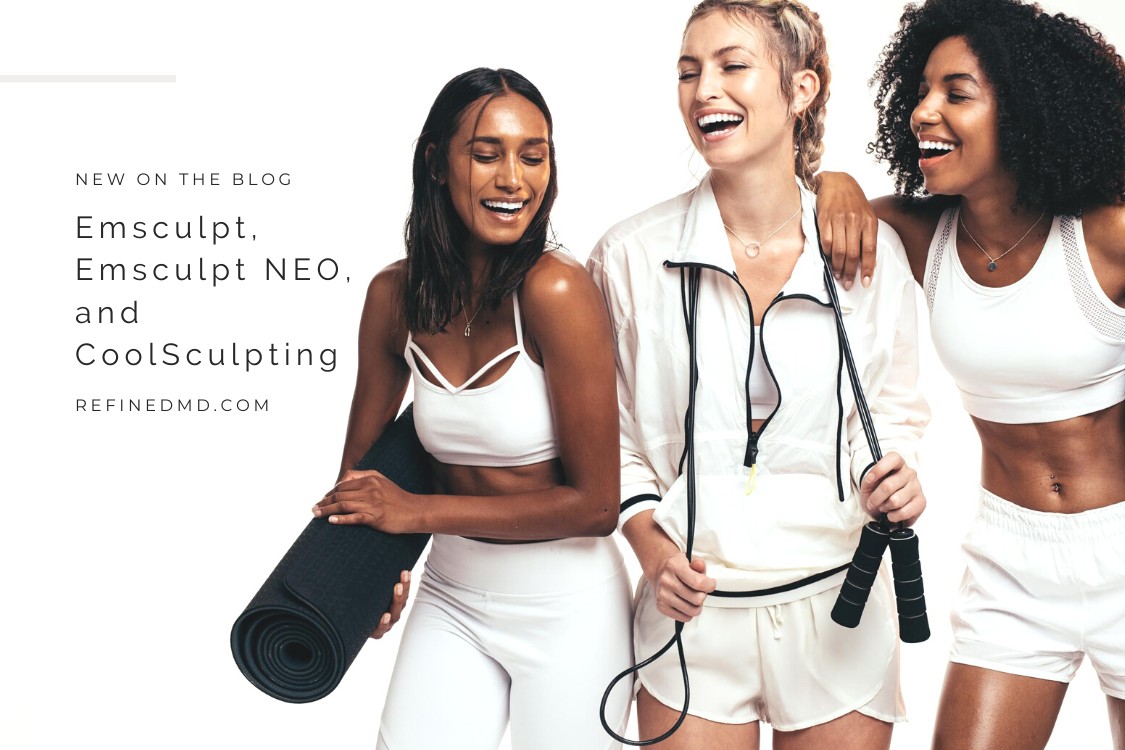 Posted at 05:00h in CoolSculpting, Emsculpt Body Toning by hradmin

If you want to take your body sculpting and contouring to the next level, dieting and the gym has its limits. But is Emsculpt, Emsculpt NEO, or CoolSculpting the best approach? Many people achieve their goals with a combination of body contouring treatments, so let’s take a look at what each of these treatments entails and targets, starting with Emsculpt. This is the OG of building muscle without lifting a finger, using high-intensity electromagnetic stimulation to contract muscles in order to make them stronger and bigger.

Supramaximal contractions are what your muscles need to grow. It’s what you achieve when lifting weights, during manual labor, and while performing many other strength-building moves. However, your body also has its limits—Emsculpt does not. It targets the muscles you want to grow and makes them undergo 20,000 contractions in just 30 minutes. Emsculpt can be used on virtually any muscle group you want to grow, including your abs, upper arms, glutes, and legs. It’s a fantastic tool to take your workouts to the next level, help you establish a baseline, and generally get to your goals faster.

Emsculpt only builds muscles. It doesn’t target fat—but Emsculpt NEO and CoolSculpting does. This means that you might want to use Emsculpt on areas where muscle-building is your only goal and you’re happy to have a little extra padding. The derriere, particularly for women, can be a great spot to get Emsculpt. Many women want a perkier butt but are also happy with the padding they have (very few women want to lose fat in their buttocks). However, for other areas, you might want to think about fat reduction, too.

Emsculpt NEO is the second generation of Emsculpt. It’s the same muscle-building tech of the original but with the addition of radiofrequency (RF) energy to simultaneously burn small amounts of unwanted fat while building muscle. RF technology is a known medium for fat-burning and does not make Emsculpt uncomfortable in any manner (though you might notice a warm sensation). Emsculpt NEO is a popular option for the stomach, back, upper arms, and for some clients the legs.

If you want to show off your muscles, you also need a sleek form and minimal fat. All three of these body contouring options are best for those who are at or near goal weight. Particularly for those who want to highlight muscles that are challenging to showcase, like the abs (as even a small amount of extra fat here can hide a six-pack), combining muscle-growth with fat-busting is a must.

CoolSculpting is the originally body contouring non-invasive treatment. It is exclusively for removing small amounts of fat, though some reports of skin tightening have also been noted (however, we recommend other treatments for tightening—and they can work quite well with CoolSculpting!). This treatment doesn’t use RF to burn fat, but instead freezes away unwanted fat cells. The tech behind CoolSculpting is rooted in an accidental discovery during the 1970s. It turns out that when fat is externally exposed to very precise cold temperatures, it kills those cells.

CoolSculpting requires 4 – 6 cycles on average, spaced a few weeks apart, for optimal results. Both Emsculpt and Emsculpt NEO also require multiple sessions. Plus, none of these treatments provide instant results. It takes time to both build muscle and burn or freeze away fat. Most clients see some results one month after their first treatment, which can be encouraging but is far from the final outcome. Full results typically take place 4 – 6 months after the final treatment.

What to Expect with Contouring and Sculpting

With Emsculpt technologies, you’re going to want to undergo maintenance sessions every six months. CoolSculpting results will last longer because once fat cells are frozen away, those specific fat cells are gone for good. However, it is not a weight loss procedure and will not prevent you from gaining weight in the future. In other words, a healthy diet and exercise is paramount to sustain and maximize results from all of these treatments. Still, you can always opt for additional CoolSculpting cycles in the future.

Are you ready to find out which of these treatment(s) is right for you? Get in touch with RefinedMD today to schedule your consultation. Call our office today or, for the fastest response, complete the online contact form right now.