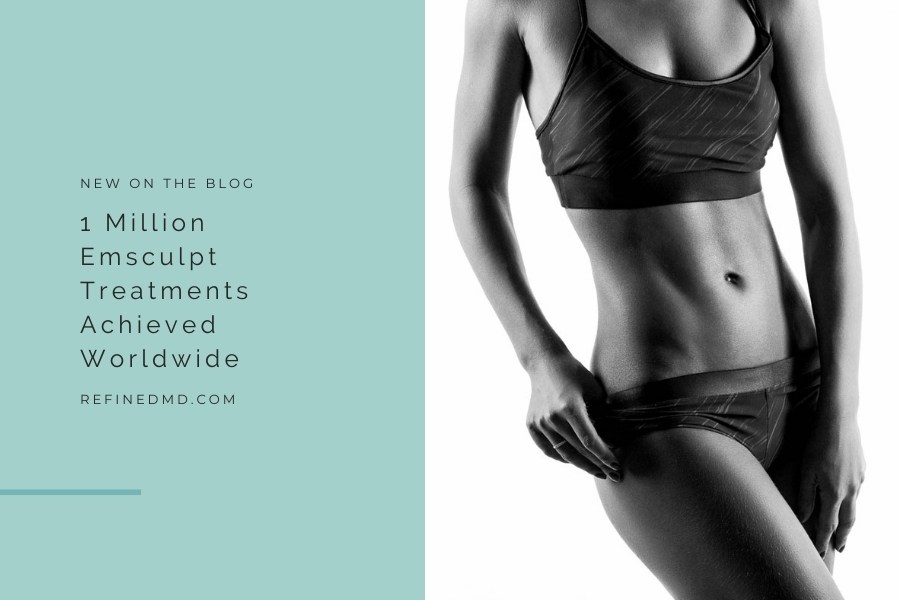 The makers of Emsculpt and Emsculpt NEO, BTL, announced that not only are Emsculpt products the fastest-growing aesthetic device on the market, but they just achieved one million treatments globally! Unfortunately, not all of those treatments are with the second-generation Emsculpt NEO approach. RefinedMD exclusively offers Emsculpt NEO because it doesn’t “just” build and tone muscles, but also burns fat in the process. If you’re one of the million people who have experienced the first-generation Emsculpt, just wait until you try Emsculpt NEO.

There are over 3,400 Emsculpt devices available around the globe and over 30 peer-reviewed publications exploring this HIFEM technology that allows you to build muscle without lifting a finger (or a dumbbell). On average, around the world 21 Emsculpt treatments/unit and 39 Emsculpt NEO treatments/unit are performed every month. Clearly, since Emsculpt NEO has nearly twice as much demands as its predecessor, people are catching on to this build muscle/burn fat double punch.

A VP at BTL says, “We didn’t rely on virtual consumables to drive consumer awareness. The awareness was earned through studies and patient outcomes. Truly, this achievement is not only history in the making, but a testament to the efficacy and impact of Emsculpt and Emsculpt NEO.” The Emsculpt technology was just launched in 2018, which can give some pause given how new it is. However, with one million treatments performed, anyone who is wary of how you can build muscle and burn fat while sitting back and relaxing can rest easy. Emsculpt now has the studies and patient satisfaction to go with the safety and outcomes of the treatment.

Currently, Emsculpt technology remains the first and only treatment that uses high intensity-focused electromagnetic energy (HIFEM) to force targeted muscles into supramaximal contractions. It’s these types of contractions that build and strengthen muscles, whether it’s achieved through Emsculpt or an old-fashioned gym routine. Emsculpt NEO was just launched in late 2020 and includes radiofrequency (RF) along with HIFEM so that fat is burned at the same time muscle is built. In clinical studies, the average patient enjoys a 30% fat reduction and 25% increase in muscle mass.* Just a few months after Emsculpt NEO debuted, it racked up five awards, including InStyle’s Best Beauty Award for Best Body Sculpting Treatment (beating out CoolSculpting) and SHAPE’s Beat of Derm Pick Award for Best Body Treatment.

Is Emsculpt NEO for You?

You might be wondering why some people are still choosing Emsculpt when Emsculpt NEO is available. Unfortunately, not every clinic consistently procures the latest, most innovative technologies—there’s a good chance those that still get Emsculpt don’t have access to Emsculpt NEO or aren’t aware of it. At RefinedMD, you can count on us always updating our technologies so that you can enjoy the latest, most effective treatments. Very few people would benefit from Emsculpt over Emsculpt NEO since having only small amounts of body fat over muscle is critical for actually showing off those gains.

Emsculpt NEO is not a replacement for a healthy diet and exercise, but rather a complement to it. You can also use Emsculpt NEO to kick-start your New Year’s resolution to get stronger and healthier. Most clients benefit from an initial 4 – 6 sessions spaced one month apart with maintenance sessions scheduled every six months. Just like a gym routine, results aren’t immediate. Muscles are growing identical to how they do after any other strength training session, which means they need protein after Emsculpt NEO and time for muscle fibers to repair and get bigger and stronger. You will see some results about one month after your first treatment, and those results will continue to improve in the weeks following your Emsculpt sessions.

Are you interested in learning more about Emsculpt NEO and finding out if it’s your best strategy for a stronger, more beautiful body? Join the hundreds of thousands of people who have already discovered the secret to getting gains and a more svelte body in just 30 minutes. Complimentary consultations are available on select treatments at RefinedMD, so get in touch today. Call the office at 408-688-2082 or for the quickest response complete the online contact form or start a live chat today.