When You Want a Facelift but aren’t QUITE Ready Yet: Meet the Abbreviated and Mini Facelift 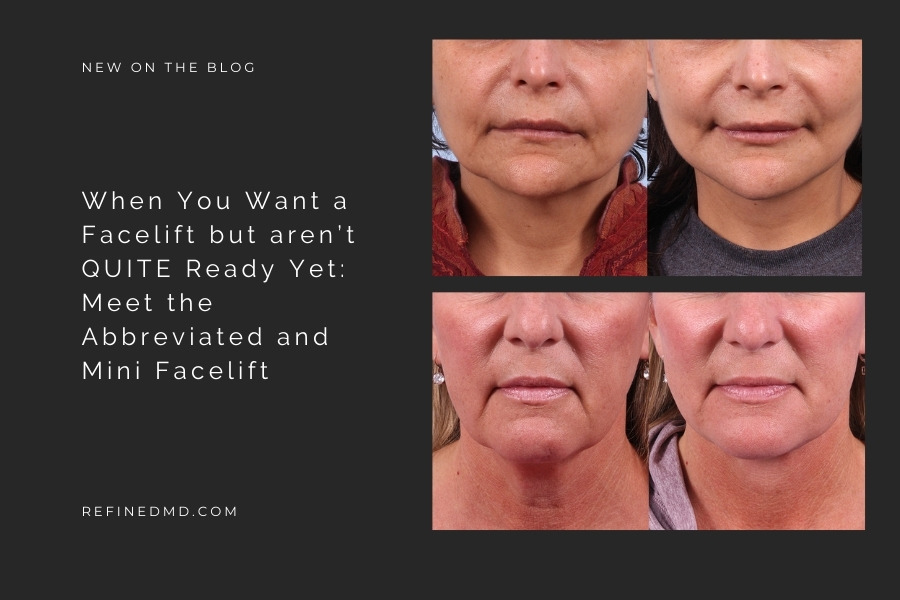 02 Sep When You Want a Facelift but aren’t QUITE Ready Yet: Meet the Abbreviated and Mini Facelift

Think you’re too young for a facelift? Skin not quite lax enough? Think again (and remember many people would love to be in your position!). At RefinedMD, double board certified facial surgeon Dr. Sudeep Roy offers variations on the full facelift, such as the mini lift, because we know there’s a space in between injections and a full facelift where you need something more than minimally-invasive procedures. There are many reasons you might desire a lift in the lower half of the face and the neck. A combination of uneven fat deposits, wrinkles, and loose skin can all have you searching for a facelift—but what if you’re just in your 40s and 30s?

There’s actually no magical age when you graduate from minimally invasive procedures to a mini lift to a full facelift. All types of facelifts can dramatically turn back the clock while still looking natural. “Facelift” is just an umbrella term used to describe a surgical procedure that corrects signs of aging on the neck/lower half of the face. There are even procedures called “liquid facelifts” that use dermal fillers to lift the face, but we prefer to keep injectables and surgical procedures in two separate camps (though of course fillers can be a great precursor or complement to surgery!).

A “full facelift” is the most aggressive facelift available. As such, it has the most and longest incisions, although these incisions are still quite tiny. In fact, they are so small that they are often hidden in the crevices of the ear. In some cases, they might be tucked deep into the hairline. Regardless, Dr. Sudeep Roy is committed to giving patients a “ponytail facelift” that allows you to wear your hair short or swept up without any telltale signs of a facelift—even a full facelift.

Today’s full facelift is also sometimes called a deep plane facelift. This is because, unlike facelifts of the 1990s, we’re not just addressing excess skin. Yes, skin laxity is one of the causes of facial aging, but when you ignore the underlying tissue you get a fake, windswept look. A proper facelift addresses the tissue beneath the skin’s surface, trims away excess skin, and re-drapes the skin in a natural-looking fashion. That’s how you can look 10+ years younger with no sign of surgery.

(Kind of) a Full Facelift

An “abbreviated facelift” is the least invasive of any facelift. It’s ideal for those who are just starting to notice signs of aging, perhaps when you’re in your thirties. This kind of facelift is minimally invasive compared to other cosmetic procedures and can fix fine lines, tiny jowls, and the start of wrinkles. This facelift is so minor that underlying tissue isn’t usually touched, which means an even quicker recovery.

The ideal candidate for an abbreviated facelift wants to minimize signs of aging before they get too advanced and are interested in very minimal incisions. The procedure itself takes just about two hours and you’ll look and feel back to yourself in 7 – 10 days. In some ways, an abbreviated facelift is a preventative facelift and can delay the desire for more aggressive procedures by several years.

A mini lift might sound smaller than an abbreviated facelift, but it’s actually a touch more complex and aggressive. It’s still simpler than a full facelift, but it’s designed to help with more advanced signs of aging with its approach. If you have moderate wrinkles, are starting to notice fat deposits around the chin, and a jowl that is starting to advance, a mini facelift might be for you.

A mini lift is performed identical to an abbreviated facelift in terms of technique and incisions. However, more skin is removed with the mini lift. Again, underlying tissue is rarely touched. Due to more skin being removed, the initial recovery period is about 9 – 12 days. Neither an abbreviated facelift nor a mini lift includes a necklift, that is reserved strictly for a full facelift.

Full facelifts can fix very deep wrinkles, substantial fat deposits, heavy jowls, and banding of the neck. These results are dramatic, last much longer than other lifts, and are often paired with other surgeries such as eyelid lifts. As such, the recovery period is longer, anywhere from 2 – 4 weeks.

If you are interested in finding out more about facelifts and other surgeries at RefinedMD, get in touch. Schedule a consultation by calling the office or completing the online contact form.