Eyelid Lifts, One of the Most Popular Surgeries for Men 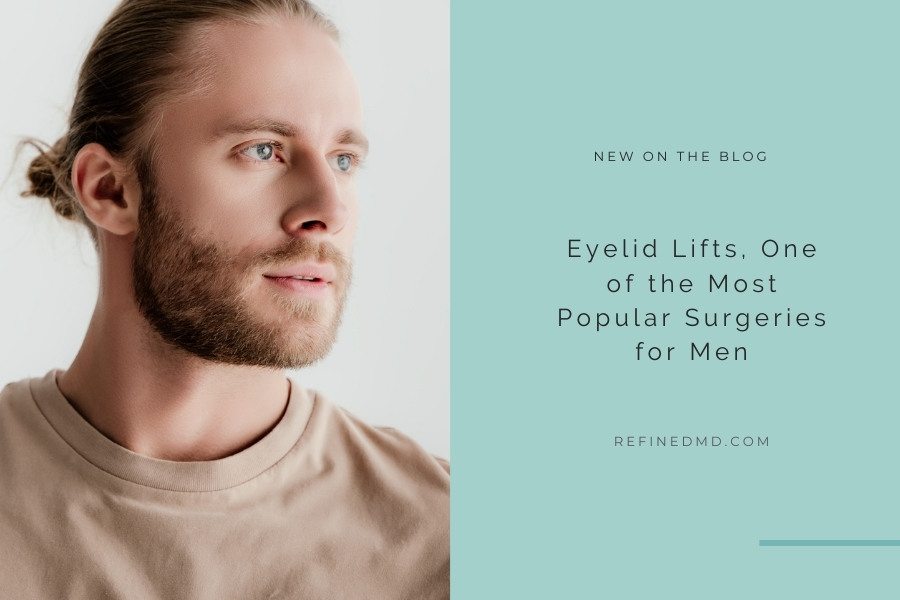 13 Jun Eyelid Lifts, One of the Most Popular Surgeries for Men

Posted at 05:00h in Eyelid Surgery by hradmin

More men are getting plastic surgery than ever before, but which surgeries are they getting? Rhinoplasty continues to lead, but lower blepharoplasty is nipping on the heels of the nose job. At RefinedMD, double board-certified Dr. Sudeep Roy has seen a spike in demand for lower eyelid lifts in women and men alike, as everyone is bidding adieu to sagging skin that makes you look tired and much older than you are. However, men have yet to catch up to women when it comes to adding upper bleph onto their procedures. In reality, anyone who will benefit from a lower eyelid lift will probably also enjoy the literal perks of an upper eyelid lift as well.

There is also a disparity when it comes to the age of patients looking for eyelid lifts. While it is very common for women as young as in their 30s to seek out eyelid lifts, on average men are 50 (or better) by the time they catch on. Men are also late bloomers when it comes to seeking out non-surgical options like Botox, often in their 40s before this happens (while with women, those in their late teens are savvy enough to know that Botox at a younger age can be preventative). However, it is anticipated that younger men will start seeking out surgical intervention soon—especially given how relatively quick and easy procedures like eyelid lifts are.

The Surprisingly Quick Downtime of Blepharoplasty

While men and women alike typically ask for facelifts as their first reverse-aging facial surgery, in actuality it’s the eyes that age the quickest. This skin is very delicate, thin, and prone to wrinkling. From its hyper-mobility to the fact that numerous studies have shown that we don’t properly apply or reapply sunscreen around the eyes as we should, it’s not shocking that this skin tends to lose elasticity and become crepe-like and wrinkly first. Many teenagers can even spot the first signs of crow’s feet. People are familiar with the term “facelift” and often think it lifts the entire face (thus its moniker). However, a facelift and mini-lift actually only lift sagging skin of the lower half of the face and/or neck. To lift the eyes and brows requires completely different procedures including an upper and lower blepharoplasty.

These two surgeries require very little downtime. While redness, swelling, and bruising are common in the first few days after surgery, these temporary side effects largely dissipate in less than one week. Lower blepharoplasty also often requires threads extending from the lower eyelids to the brows (where they are usually taped), but this is removed after just a couple of days. As for incisions, for lower bleph they are expertly hidden along the lash line or even inside the eyelids. Upper blepharoplasty calls for incisions tucked into the natural creases of the eyelid. This means that neither upper nor lower blephs have any visible incisions. In fact, most clients feel comfortable getting back to most daily routines 1 – 2 weeks after their surgery (including sedentary desk jobs). Thanks to the high vascularity of this area, healing is fast, easy, and comfortable.

Blepharoplasty is the Ultimate Refresher

There is a myriad of non-surgical options for rejuvenating and even tightening skin, but most are not suitable for the eye region because of how fragile it is. Ultimately, if you really want to revitalize this area, upper and lower blepharoplasty are usually the procedures to give you the results you’re really looking for. Addressing ptosis, the technical term for sagging of the upper eyelids, usually requires surgical intervention for natural-looking yet dramatic results that last.

Lower blepharoplasty can fix sagging, drooping skin and even bags under the eyes. In some cases, it is beneficial to include a small amount of liposuction if fat pockets have become pronounced or uneven. Both sagging skin and fat can cause an undesirable look. For a few patients, adding in dermal fillers can be the trick to smoothing out skin, youth-ifying it, and even drastically reducing or removing dark circles. If dark circles are caused by lack of or uneven fat that allows vessels to be easily seen (rather than darkness on the skin itself), dermal fillers combined with lower blepharoplasty is a great solution.

Upper blepharoplasty largely fixes droopiness of the upper eyelids. If you’ve noticed sagging in this area or you’re no longer able to clearly see your upper eyelids, upper blepharoplasty may be for you. If sagging extends to the brows and above, combining upper bleph with a brow lift may be in order. The first step in figuring out which surgery or surgeries will give you the results you want is with a consultation. Schedule yours at RefinedMD with Dr. Roy by calling the office or completing the online contact form.