Upper, Lower, and Mini Facelift Surgeries in Patients in their 50s – 70s 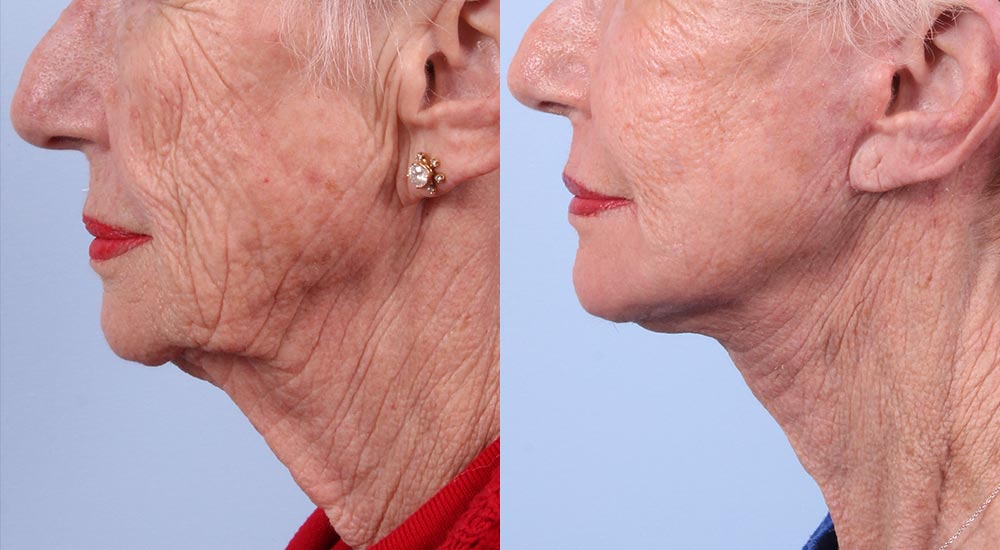 12 Aug Upper, Lower, and Mini Facelift Surgeries in Patients in their 50s – 70s

A lot of people think they want “a facelift,” but in reality there are three very different kinds of facelifts: a lower facelift, upper facelift, and mini facelift. All three are available at RefinedMD and performed by Dr. Sudeep Roy. It’s important to stress that it is very common for a combination of surgeries and treatments to be necessary to achieve the results you want. A “facelift,” or traditional facelift, is actually a lower facelift that addresses skin laxity and sagging in the lower half of the face as well as the neck. But which surgery, or surgeries, is right for you? Let’s consider some of Dr. Roy’s patients in ages ranging from their 50s – 70s to see his recommendations and approaches.

Facelifts for Those in Their 70s

Dr. Roy treated a 77-year-old woman who was worried about looking much older than those in her dance and yoga classes. She felt young on the inside and wanted her outside to “match.” A patient’s health is top priority when opting for elective surgery, and every patient Dr. Roy treats requires a clean bill of health prior to a facial plastic surgery. Ultimately, this very active 77-year-old received a lower facelift combined with upper and lower eyelid surgery (also known as blepharoplasty). Eyelid surgery is a common, popular aspect of an “upper facelift” since the skin around the eyes is the first to show signs of aging.

Another patient was 70 years old and concerned about facial aging. However, it wasn’t just skin laxity and loss of facial volume (which is to be expected at 70 years old!), but also severe sagging at the eyes, neck, and jowls. Skin pigment issues were also present. Dr. Roy recommended a lower facelift, lower blepharoplasty, full face fat transfer, as well as a chemical peel. Keep in mind that facial surgeries address skin laxity but not the skin quality itself (such as brown spots). However, coupling facial plastic surgery with non-surgical treatments can allow for a full facial rejuvenation.

Facelifts in Your 60s

One 65-year-old patient had previously undergone two lower facelifts at a different clinic. However, she still struggled with severe lower cheek wrinkles and crepe-like skin on her neck. Dr. Roy recommended a lower facelift and fractional laser treatment around the mouth. This patient was not uncommon in having prior surgeries. Three facelifts in someone’s life is not unusual since our skin continues to age after a surgery. The goal of a facelift should be to achieve desirable results that last as long as possible, and working with a board-certified facial surgeon like Dr. Roy can make this happen.

Another 65-year-old female patient saw Dr. Roy about issues with severe jowling and laxity of the neck skin. She had been bothered by this for years, but didn’t seek out surgery until retirement was looming. Dr. Roy recommended a limited incision lower facelift, also known as a Refresh Mini-Lift, coupled with a small amount of liposuction at the jowls. She looked ten years younger after the procedures! As you can see, not everyone in their 60s requires a full facelift. A mini facelift is customized for each patient and features shorter incisions as well as a quicker recovery period.

A Facelift for Your 50s

The 50s is when a lot of people start seriously thinking about a facelift (though they can certainly be recommended even earlier). One patient of Dr. Roy’s had depended on Sculptra dermal injections to keep up her facial volume, but in her late 50s Sculptra was no longer enough. Dr. Roy recommended a mini-lift, or limited-incision lower facelift. She was absolutely thrilled with the results, as well as the shorter incisions and brief recovery period.

A 51-year-old female patient also saw Dr. Roy about her wrinkles, jowls that were sinking, neck crepey-ness, and heavy eyelids. She was much younger than any of the previously mentioned patients and proof that our skin ages at a different rate. Dr. Roy recommended a lower facelift, facial fat transfer, and upper blepharoplasty. Although she was initially worried about visible scarring, once she understood how well the incisions were hidden around the ear crevices and in the natural crease of the eyelid, she was ready to move forward. Three months after her surgery, she reported that she was ecstatic with the results.

At RefinedMD, we personalize every surgery to the patient. To learn more about facelifts of all types, contact our office at (408) 688-2082.