What You Have to Know About Lasers 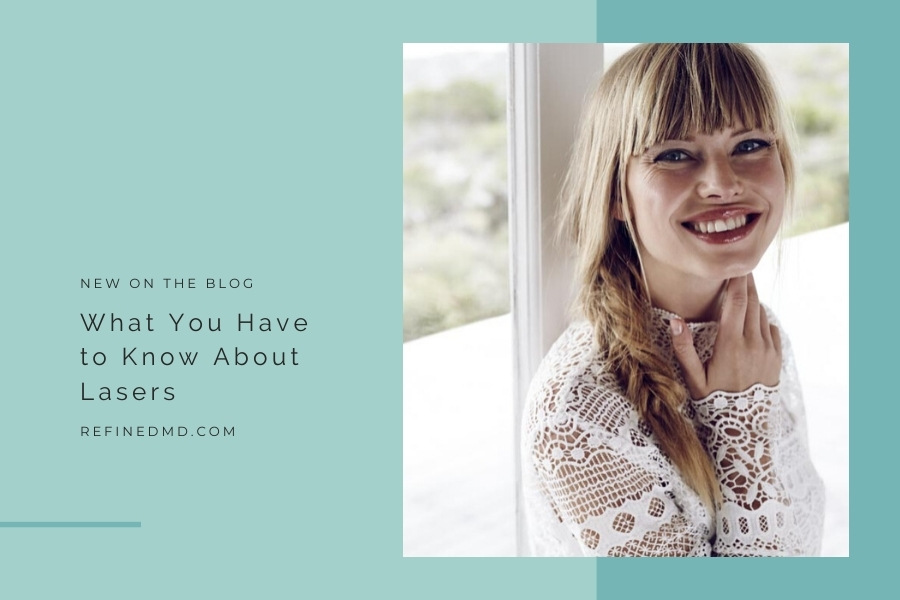 07 Apr What You Have to Know About Lasers

Laser skin rejuvenation can treat virtually any skin woe, and each technology is different. At RefinedMD, we have over 20 of the best and most effective lasers including favorites like intense pulsed light (IPL), broadband light (BBL), Halo, and Clear + Brilliant. Why so many different lasers? Because your experience should be customized to you. Let’s discuss some of the things you should know about lasers as you get ready to schedule your complimentary consultation.

For starters, not all lasers are lasers. A lot of the devices touted as lasers use light-based energy, heat, or other technologies. However, the term “laser skin resurfacing” has simply stuck, and today it’s often used to indicate many types of technologies. These “lasers” can treat everything from acne scarring to hyperpigmentation, fine lines and wrinkles, loose skin, and even stubborn issues like melasma.

Small, controlled injuries throughout the body can actually be a good thing! In fact, that’s how you get your muscles to grow. When you lift weights properly, you’re creating micro-tears in the muscle fiber (pro tip: Emsculpt and Emsculpt NEO work the same way!). The same can be said of lasers. They use light or heat energy to create a type of controlled damage in or on the skin. This makes your body get to work healing, creating “new” skin, and ramping up collagen production in the process.

Before and after photos of those who have opted for laser treatments say plenty on the results. Drew Barrymore is a fan of Clear + Brilliant, and if you’ve seen her flawless face you’ll quickly become a convert. It’s no surprise that Kim Kardashian mentions her laser skin resurfacing seemingly as often as the rest of us share our dish of the day. However, you don’t need to be a celeb or have their budget to get on the laser bandwagon. The American Society of Plastic Surgeons reports that use of lasers has increased 248 percent since 2000, so you’re in good company! Still, there are some things you have to know before you opt for lasers.

You’ve probably seen laser rejuvenation offered in many places, from your dermatology office to a salon. The skill and experience of the person operating the technology matters a lot. Laser devices are incredible machines that manipulate energy, and one wrong move from a poorly trained person can take you from perfect skin to worse hyperpigmentation or even a burn. The laser is just half of the equation—the skill of the person operating it is the other.

It’s also a good idea to have general knowledge of the differences in lasers. We’ll go over this with you during your consultation. However, to get started, the most powerful lasers are called ablative. They actually remove the top layer of the skin and part of the second layer. It’s a controlled zapping away of skin cells, and the body responds quickly to create new skin. Recovery after treatments with these lasers takes about one week.

Non-ablative lasers are sometimes called non-wounding and they are gentler. Non-ablative lasers send their energy to deeper tissues without having to disrupt the epidermis. The results are understandably subtler than with ablative, but they can be better suited for those with more melanin in their skin due to their lowered risk of hyper/hypo-pigmentation.

Finally, there’s fractionated lasers. These send heat and light to targeted areas in a pixelated manner. This allows for minimal damage while still achieving optimal results. It’s kind of the middle between ablative and non-ablative lasers, offering less down time than ablative because you’re only damaging the skin in a scattered manner.

Seeing the Light: An Alternative To Traditional Lasers

The above options are all genuine lasers, but there’s also light-based therapies routinely lumped into this category. This includes IPL and BBL. They can achieve similar results to lasers, but are typically gentler and better targeted. Numerous light wavelengths are directed to the site. These aren’t going to give you the big before and after photos, but are a great option for younger clients or those looking for maintenance.

So, which technology is best for you? Find out! Sometimes it’s even best to be custom-matched to a combination of therapies to really get the results you deserve. Connect with RefinedMD today by starting a chat, giving us a call, or completing the online form to schedule your consultation.