Who are Facelift Patients? 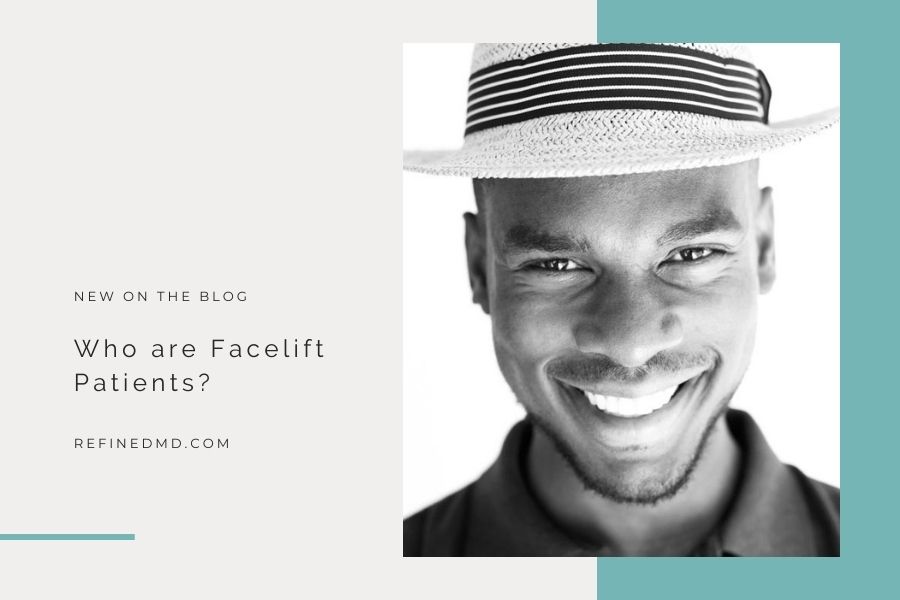 26 Jul Who are Facelift Patients?

If you’ve been thinking about getting a facelift or mini facelift in San Jose, it’s common to wonder if you’ve become “one of those people.” But who exactly are “those people” who get facelifts and mini facelifts? At RefinedMD, Dr. Sudeep Roy works with all types of patients including both men and women of various ages. The taboo-ness of cosmetic surgery has largely disappeared (thankfully!), but researchers remain curious about the typical facelift patient. In David Sarcu’s “Psychology of the Facelift Patient,” he undertakes a literature review that comprises 50 years of research.

The primary motivations for a facelift are to improve self-esteem, relationships, job prospects, and even “making new friends,” according to Sarcu. In total, 95 percent of patients reported being satisfied with their facelift as well as an overall improvement in their life. Patients reported less self-consciousness, and Sarcu found that patient satisfaction was largely dictated by whether the patient actively wanted a better self-image prior to the surgery. In other words, patients who undergo a facelift and know that they want to look and feel their best will manifest this into reality—with the help of a skilled, board-certified surgeon like Dr. Roy, of course.

Who isn’t a Good Facelift Candidate?

Not everyone is a great candidate for a facelift, which is why consultations are so critical. There are various factors that make someone a good candidate for a San Jose facelift, but according to this research those who are of a “young age,” have certain preexisting psychological pathologies, and who have “unrealistic expectations” might not be happy with their results no matter how skilled the surgeon is. According to Sarcu, “The surgeon is, in essence, providing a vehicle for hope and expectation of enhanced self-esteem and self-confidence.” This is true even though the outward appearance is being enhanced because it directly links to the “inner spirit and sense of beauty.”

It’s no surprise that “who” facial plastic surgery patients are have shifted in the past 50 years. In the 1950s and 60s, it was found that patients searching for plastic surgery had “significant psychology pathology.” This has, of course, decreased dramatically over time. In mid-century America, the typical patient was a middle-aged female who was undergoing a “time of crisis and stress” according to Sarcu. They were also facing situational issues such as divorce or empty nests.

Today, patients in their 40s and 50s (one of the most popular groups to opt for facelifts) are considered part of the “worker group.” They typically have stable relationships and a solid career or job. In fact, they often list their most important relationship as with their co-workers. As a whole, they are the most ambivalent about aging as they have matured from those aged 29 – 39, who Sarcu calls the “emotionally dependent group.” During this decade, the group is more insecure and struggling with the responsibilities of adulthood. Those who are married are often emotionally dependent on their spouse, and those who are parents can struggle with that role since their relationship with their own parents was often dependent and volatile.

In other words, you can look at the commonalities amongst various age groups right now and see how potential patients might be a good fit for a facelift. Since the majority of patients are female (though not all!), the changing role of women informs who is getting a facelift and at what age. Sarcu also touches on male patients and found that the typical patient has “high personal expectations.”

So … is a San Jose Facelift for You?

As you can see, while there are some commonalities amongst facelift patients, there is no real typical patient. Your motivation for thinking about a facelift or mini facelift might be drastically different than someone else. What we can glean from this research is that facelifts have become more mainstream, more widely accepted, and more desired by men and women of virtually all ages. Wanting a better self-image is the first step in deciding whether you want a facelift. The next step is finding the best board-certified surgeon.

Dr. Sudeep Roy specializes in facelifts that are both dramatic and natural-looking. The latest techniques allow for nearly invisible and well-hidden incisions. If you’d like to schedule your consultation with Dr. Roy, contact RefinedMD via the online form or call (408) 688-2082.