The Dysport Difference: Why You Should Cheat on Botox with Dysport 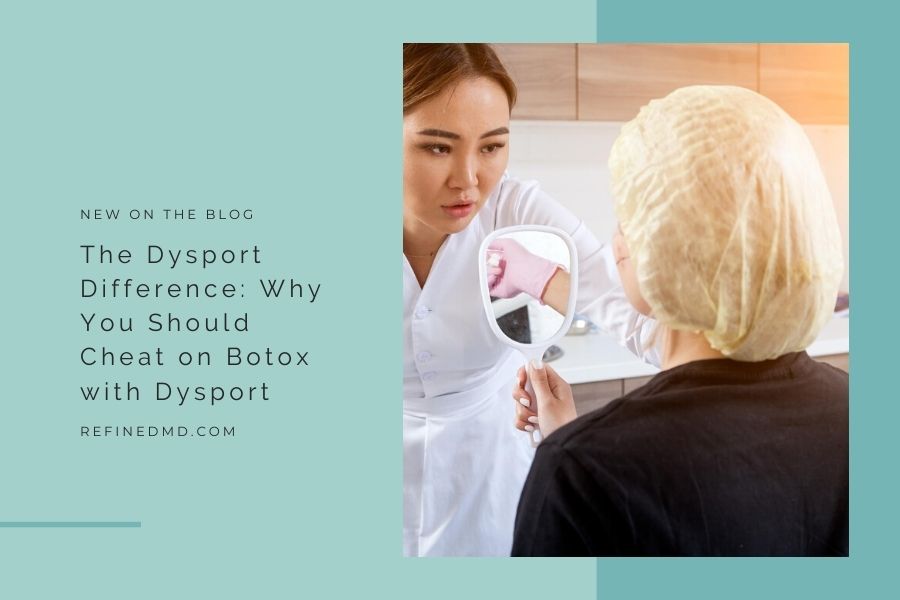 10 Aug The Dysport Difference: Why You Should Cheat on Botox with Dysport

Are you a hardcore Botox lover that’s being tempted by another neuromodulator? Whether you’re thinking about Dysport, Xeomin, or Jeuveau, sometimes trying something new is just what you need. At RefinedMD we offer all of the most popular, safest, and effective neuromodulators and there’s a reason Dysport has been giving Botox some serious competition. All neuromodulators work by relaxing muscles that cause unwanted lines and wrinkles, but Botox is the OG. It has been around for decades and has well earned its strong and loyal fanbase. However, Dysport has been FDA-approved since 2009, so it’s no spring chicken—but it will help you look like one.

Botox and Dysport, the two most established and popular of neuromodulators, have a lot in common. Dysport is specifically designed to address moderate to severe wrinkles and results last 3 – 6 months on average. That’s about the same timeframe as Botox, but some people think Botox lasts longer for them while others say it’s Dysport. There’s also some evidence that switching between neuromodulators can help extend results, kind of like developing a “tolerance” for one or the other. So, if you’ve been all about Botox for years, you might also find that changing to Dysport helps you enjoy longer-lasting results.

It’s What’s on the Inside that Counts

Both Botox and Dysport have the active ingredient botulinum toxin A. It’s a toxoid from a bacterium that stops the nerve signals to certain muscles, which results in the relaxation of these muscles. When this happens, the muscles simply can’t “make” these unwanted lines and furrows. However, there’s a difference in concentration when comparing Dysport and Botox. Dysport is more diluted, using protein molecules that are smaller than the ones found in Botox. This smaller size means it’s not as easy for antibodies to break it down, which is one reason why Dysport can seem to last longer for many people.

There’s another benefit to this concentration difference: it’s great for treating larger areas like the forehead. Dysport is meant to spread a little bit so you can cover a bigger area. That’s why Dysport is a popular choice for the forehead! It can spread to treat smaller areas like crow’s feet while also tackling the angry elevens and forehead lines. There’s also a difference in molecular weight when comparing Dysport and Botox, with Dysport being a little lower. This also contributes to Dysport’s ability to spread across bigger areas post-injection and as a bonus usually requires fewer injections. If you don’t like the multiple injections often required when using Botox, that in itself might be a reason to check out Dysport.

A Neuromodulator for Everyone

Of course, if you use neuromodulators to treat targeted areas like around the mouth or below the eyes, Botox might be the best option for you. Many clients also mix and match injectables, using them for different areas. For example, Botox can be great to “just” treat the angry elevens or smaller targeted areas while Dysport is an excellent choice for crow’s feet and forehead lines. You will typically need a higher dose of Dysport because it is diluted, but the pricing mechanism between the two ends up with clients paying about the same price for either Botox or Dysport. Cost should not be a factor when choosing between the two.

While neuromodulators have a lot of similarities, one factor that isn’t the same across the board is the skill of the injector. You deserve to only work with experts to get the results you want, and that means depending on estheticians who are highly skilled, experienced, committed to ongoing training, and part of a dermatological team. You can get matched with the perfect product for you, but if the injector isn’t at the top of their game then you’re not going to love the results.

RefinedMD is your home for injectables and every other treatment to help you fall in love with your look. Let’s discuss options for neuromodulators today so you can start enjoying the results in time for summer vacation! Connect with RefinedMD by completing the online form or call the office at (408) 688-2082 to book your appointment.