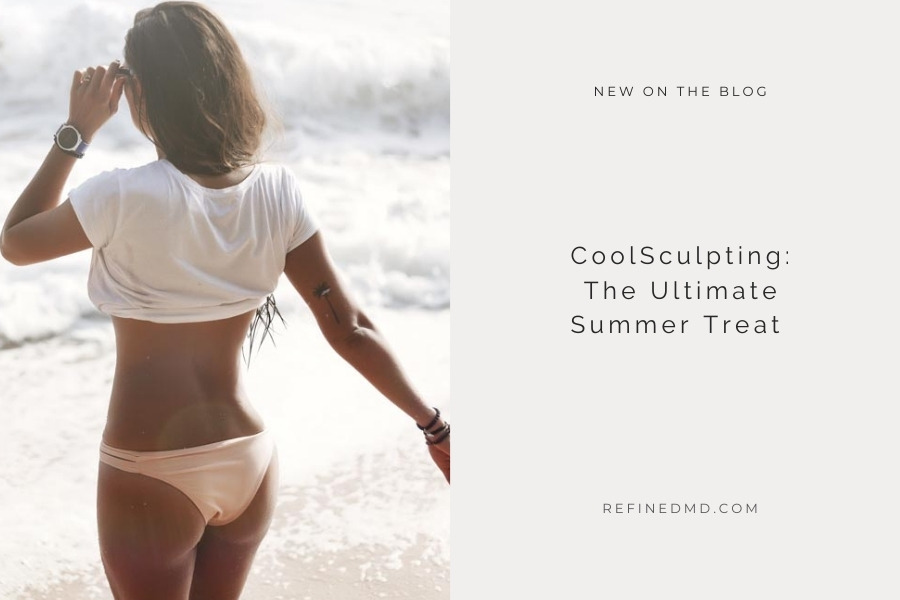 Summertime is for popsicles, swimsuits—and CoolSculpting! In fact, this favorite non-surgical procedure has its own roots in summertime fun. The technology, called cryolipolysis, was discovered by accident in the 1970s by researchers who wondered why kids who ate a lot of popsicles had less facial fat than their peers. It turns out that, at very precise lower temperatures, fat permanently “dies” and does not get regenerated. The foundation for CoolSculpting was uncovered and it remains the leading way to get rid of fat without going under the knife.

Today’s CoolSculpting technology features a number of specialized handheld devices to treat virtually every part of the body including the stomach, thighs, upper arms, and even below the chin. CoolSculpting requires a series of sessions, typically 3 – 6, spaced about one week apart for optimal results. This means that if you start treatments now, you’ll be able to see phenomenal results in time for the holiday season. However, do keep in mind that full results take about six months after the final treatment.

CoolSculpting uses external handpieces to target and “freeze” unwanted fat*. However, this fat doesn’t immediately disappear. Cryolipolysis is a slow and steady process. Once the fat has been “frozen,” it takes some time for the body to absorb it and naturally and safely dispose of it. This means that right after your sessions, you’re not going to see results. Instead, you’ll see results start to appear in the weeks following your treatment. It’s a good idea to take measurements (as we do) so that you can “see” the inches dissipate.

CoolSculpting is not a “fat loss” procedure even though most people will see a pound or two drop from the scale. Instead, it’s a contouring and sculpting procedure. It’s recommended for those at or close to their goal weight and who are struggling with stubborn fat pockets or for those who simply want to sculpt certain body parts to achieve their final body aesthetics. You can also use CoolSculpting in conjunction with Emsculpt NEO for maximum results that also include muscle-building. We’ll work with you to determine a treatment plan that’s best for you and your goals.

CoolSculpting has been around for many years, though improvements are always being made. For example, the ability to treat under the chin is relatively new! Here are some of the most common CoolSculpting questions answered.

Does CoolSculpting hurt? No, though some clients might describe it as feeling a little odd during their first session. It is, of course, quite cold and the hand tools can make it feel like the targeted area is in a vacuum. However, no type of pain reliever is required and most clients scroll through their phone, work on tablets, or read a book during their session.

When will I start to see results? Full results take six months after the last recommended session, on average, but many people will start to see some initial improvement about one month after their first treatment. Results are unique to the individual, but photos and measurements are a great way to track your progress.

Will the fat come back? Not exactly. When fat is frozen, it’s gone for good. It isn’t just “shrunk” like with diet and exercise. However, CoolSculpting is not a fat loss procedure or an alternative to a healthy diet and active lifestyle. Weight gain can lead to nearby fat cells expanding and “moving” into the CoolSculpted area.

Does it matter where I get CoolSculpting performed? Absolutely! CoolSculpting technology is only as safe and effective as the provider performing your treatment. If you want the best results and a comfortable experience, it’s critical to only trust trained medical professionals with your CoolSculpting treatment.

How can results be improved? Starting or maintaining a healthy diet and routine exercise is a must for optimal CoolSculpting results. You can also try Emsculpt NEO in collaboration with CoolSculpting. Collagen induction treatment, such as microneedling and laser skin rejuvenation, can help tighten skin and make it more supple, which is an excellent complement to body contouring and sculpting.

Ready to find out more about CoolSculpting or schedule your consultation? Contact RefinedMD right now by filling out the online form or calling (408) 688-2082.