The REAL Secret to Keeping Cool This Summer: CoolSculpting 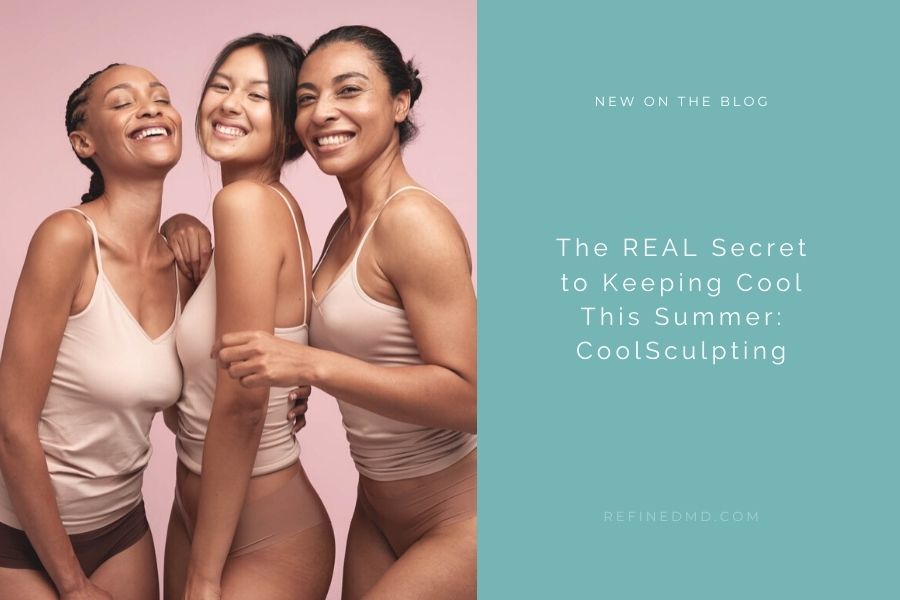 25 Aug The REAL Secret to Keeping Cool This Summer: CoolSculpting

Posted at 05:00h in CoolSculpting by dev

Things are REALLY heating up, but we’ve got the secret to staying cool—and looking good doing it. There’s a reason CoolSculpting has been the ultimate tool for contouring and sculpting the body for decades: it works, it’s totally non-invasive, there’s no downtime, and it’s undeniably cool. In fact, it’s the perfect summertime treatment because it has its roots in a seasonal favorite. Popsicles! The science behind CoolSculpting was discovered in the groovy 70s when researchers noticed that kids who had a penchant for Popsicles also had less fat in their face. It turns out that at just the right temperature, fat freezes away for good. But don’t go stocking up on Otter Pops just yet. There’s a little more to it if you want customized results.

At RefinedMD, CoolSculpting has long been a patient favorite but every summer there’s a surge of new and returning clients. When summer is in full swing, the tank tops, swimsuits, sundresses, and crop tops come out to play. If you notice there’s a little more wiggle in your walk (and not in the way you’d like), CoolSculpting is a quick and easy way to spot-reduce and freeze away stubborn fat. It’s not a “fat loss” procedure, though most patients do notice a few pounds disappear at the end of their treatment. Instead, CoolSculpting is best reserved for those close to their goal weight but who are struggling with problem areas.

Today, the makers of CoolSculpting have created hand tools to treat virtually every part of the body and even below the chin (an area known to accumulate submental fat). You can combine treatments, with every site taking around 30 minutes on average. Most clients require about 5 treatments per site in total for optimal results. These sessions are spaced a few weeks apart so that the full results from the previous treatments have been achieved. It’s important to remember that the results aren’t immediate. Once the targeted fat is “frozen,” it takes time for the body to absorb and expel the dead fat cells. Taking photos of your progress and measuring in inches lost rather than pounds is the best way to stay on top of your CoolSculpting journey.

However, just because full results don’t happen right away doesn’t mean it’s too late to CoolSculpt for summer 2021. You will start to see some progress just a couple of weeks after your first session. With results comes confidence, so you still have enough time to kick that self-esteem into high gear before pumpkin latte season begins. The sooner you schedule your consultation for CoolSculpting, the sooner your contouring journey can begin.

Those who are close to their target weight are ideal candidates. Men and women of all ages might benefit from CoolSculpting. Since appointments are so quick, you can squeeze CoolSculpting into even the busiest of schedules. Many clients slip in during their lunch break and can even keep working during their treatment. CoolSculpting can feel a little funny for first-timers, but it’s not uncomfortable at all. You can maximize your “me time” by checking out social media, catching up on a show, or reading a book while your fat freezes away.

CoolSculpting does freeze away those fat cells for good, but it’s not a substitute for a healthy diet and exercise. Weight gain can cause nearby fat cells to expand and fill the space previously vacated via CoolSculpting. In other words, think of CoolSculpting as one more tool in your arsenal of beauty rather than an alternative to workouts and eating your veggies. However, it is pretty *cool* that this treatment freezes fat cells* away rather than just shrinking them like diet and exercise do! Plus, it spot-reduces, which just isn’t an option if you only count on workouts and calorie reduction for weight management.

The Coolest Summer Ever

There might be record-breaking heat waves across the globe right now, but with CoolSculpting you can keep things easy and breezy while transforming your body. Another great option is combining CoolSculpting with complementary treatments like Emtone to tighten skin while contouring the body. Schedule your consultation for CoolSculpting at RefinedMD today by calling the office or completing the online form.