Muscle Up to These Facts with Emsculpt NEO 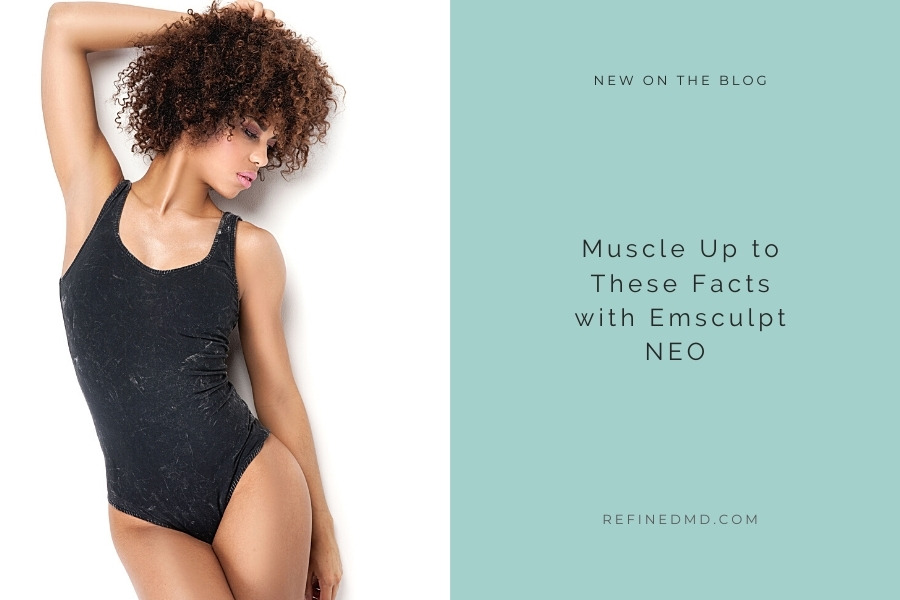 15 Sep Muscle Up to These Facts with Emsculpt NEO

Would you rather burn fat or build muscle? If you’re like most people, the answer is both! That’s why RefinedMD offers Emsculpt NEO, the latest generation of Emsculpt technology. The first Emsculpt “only” built muscle, but Emsculpt NEO builds muscle while burning fat at the same time due to HIFEM technology. But, besides looking fab, what are the benefits of having larger muscles and less fat? Let’s take a look at everything Emsculpt NEO can do for you both on the surface and well below it.

Most people start losing muscle mass at the age of 25. This is called sarcopenia, and between the ages of 40 – 70 you lose about 8 percent of your muscle mass every decade. That skyrockets to 15 percent per decade once you reach the age of 70. Aging isn’t the only thing that causes muscle loss. There are also a host of diseases (such as cancer), and muscle tissue is a big factor when it comes to metabolic function. If you lose too much muscle mass, this can cause both a cognitive and physical decline.

Everyone reaches a point where they are losing more muscle than they are gaining, even with a solid gym routine. You can’t avoid the effects of getting older, but you can certainly delay them—and Emsculpt NEO can help. The more muscle we have when our bodies begin breaking down, the longer we can sustain physical and mental function.

Did you know that muscles help with blood sugar management? Sedentary lifestyles and poor diets are major factors in “diabesity” (a combo of obesity and diabetes). Since about 66 percent of the US population is overweight/obese and either pre-diabetic or diabetic, this is a “big” issue.

Without regular exercise, and specifically muscle strengthening, we can’t store carbs as we should—and when this happens, our blood sugar spikes causing the pancreas to release insulin. This rampant energy storage leads to fat deposits, but having more muscle mass ensures that the body uses this energy more quickly. Think of it as quick-storage as opposed to long-term storage. Studies have also shown that blood sugar dysfunction is linked to cognitive issues, accelerated aging, cancer, and heart disease, so muscle building is always a good move.

Muscles have a big job, and one of them is to support our joints. A lot of people avoid traditional weight training because it hurts their joints, which is unfortunately a bit ironic. It can be tough to get into weight training if you struggle with joint pain, and Emsculpt NEO is a great way to set this foundation. It requires no effort on your part, and builds muscles (to support joints!) while simultaneously burning fat. Too much fat can cause joint strain, and a mix of poor muscle strength with excess fat can be the perfect storm for cranky joints.

Plus, muscle growth also leads to a bone density increase. Just like we lose muscle mass as we get older, we also lose bone density—that’s why elderly folks are so prone to breaking their bones. When your body undergoes proper stress via exercise, it uses amino acids to repair muscles and calcium, vitamin K and D, magnesium, and protein to build bone. Our bodies simply aren’t going to increase bone density unless we “tell” them to, which means stressing the bone with resistance. Emsculpt NEO forces muscles into 20,000 supramaximal contractions in just 30 minutes, making it an excellent controlled stressor!

The Muscle and Fat Combination

Most have heard that muscle burns a lot more calories compared to fat. This means that if you’re dropping fat but building muscle, the scale might not change. After our 20s, our metabolic rate drops 2 – 3 percent per decade, then 4 percent per decade after the age of 50. However, muscle mass can help to regulate body fat. But if you really want to get a jump on this, Emsculpt NEO pulls double duty increasing muscle size and strength while also blasting away unwanted fat.

Most clients require 4 – 6 initial sessions of Emsculpt NEO to achieve the best results, but you’ll start to see improvement after just one session. Ready to get started? Call RefinedMD today to schedule your consultation or fill out the online form.