Should You Choose Emsculpt or Emsculpt NEO? 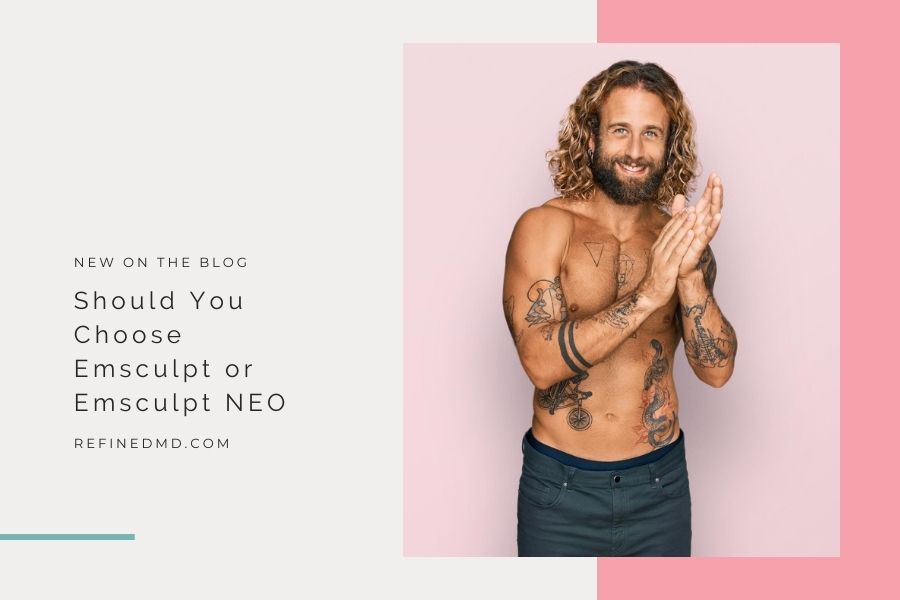 27 Aug Should You Choose Emsculpt or Emsculpt NEO?

Posted at 05:00h in Emsculpt Body Toning by dev

Emsculpt NEO is the latest iteration of the famed Emsculpt, but at RefinedMD we continue to offer both because every client is unique! If you’re just starting to explore the differences among BTL technologies, let’s take a look at these two options. Both are non-invasive body sculpting treatments that build muscle—but only Emsculpt NEO adds fat burning to the mix. Emsculpt NEO adds radiofrequency to burns away fat and can also be used on those with a BMI up to 35. In actuality, the kind of technology used in each is wildly different so it’s important that you get matched with the right machine for you and your goals. The first step is a consultation.

Both technologies are FDA-approved, and Emsculpt (the original) delivers high-intensity electromagnetic pulses—also known as HIFEM—to make muscles contract. This results in 20,000 supramaximal contractions in just 30 minutes. That’s the exact same result as if you performed 20,000 crunches, squats, or another strength move. As you can imagine, 20,000 sit-ups are going to give you some serious gains. However, neither Emsculpt nor Emsculpt NEO is going to give you a six-pack immediately after a 30-minute session. Remember: your body thinks it just did 20,000 lunges or another exercise. It needs to recover and it takes time to build those muscles. Most clients require a series of Emsculpt or Emsculpt NEO sessions to build a foundation and results begin revealing themselves a few weeks after the first session.

Emsculpt NEO made its debut less than one year ago. It also uses HIFEM, as well as RF energy. This means that the body can burn fat while also building those muscles. RF technology literally melts away fat cells, allowing for targeted spot reduction and better contouring. It is not a weight loss procedure and you might not notice the scale budging at all—in fact, you might gain a pound or two because of the HIFEM muscle-building! Before and after photos, along with measurements rather than a scale, are the best tools to gauge your Emsculpt or Emsculpt NEO progress.

Both machines can treat five key areas including the abs, butt, arms, legs, and calves. As an added bonus to Emsculpt NEO, the RF heat also causes an increase in blood flow to the treatment site so that the muscles build up even faster and stronger. It’s like the ultimate warmup. At the same time, the damaged fat cells literally break down and are then slowly metabolized by the body in the days and weeks following the treatment. This means permanent removal* of unwanted fat cells. Unlike diet and exercise that only shrink fat cells, Emsculpt NEO is a permanent solution. However, it is not an alternative to a healthy lifestyle—it is a complement to it.

It is not unusual for some clients to choose Emsculpt for one body area and Emsculpt NEO for another. For example, Emsculpt NEO is a very popular pick to treat the abs. Few clients want to hold on to extra fat in this area. On the other hand, the original Emsculpt might be a good pick for the bum where some people want as much volume as possible. Mixing and matching the technology is a great way to customize results.

On average, studies show that Emsculpt increases muscle mass 16 percent while Emsculpt NEO can give a boost of up to 25 percent. Those who use Emsculpt NEO enjoy a 35 percent fat reduction* at the target site just 3 months after the last treatment. You can also add Emtone into the mix, the latest technology that tightens skin! Sometimes skin laxity gets in the way of optimal results, especially for those who have experienced a large weight reduction. If this is you, adding Emtone to your treatments will help take your results above and beyond.

Now that you have an idea of what all these technologies do, it’s time to take the next step. You still have time to book your treatments in time for your summer vacation plans. Get in touch with RefinedMD today via phone or complete the online form to book your consultation for Emsculpt, Emsculpt NEO, Emtone, or all three!