What is Sarcopenia (and What Can You Do About It)? 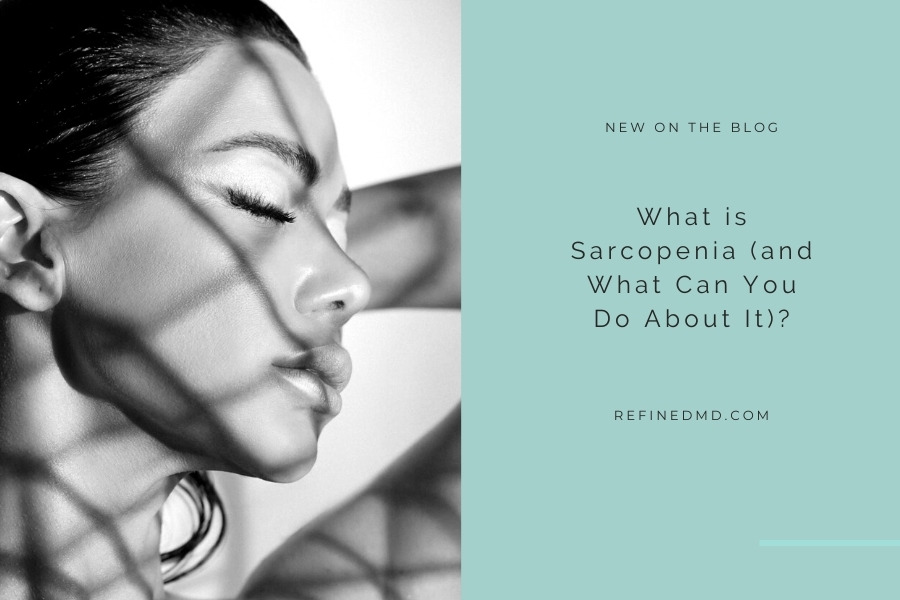 29 Sep What is Sarcopenia (and What Can You Do About It)?

Does it seem like it gets tougher and tougher to grow (and keep) strong, large, toned muscles the older you get? It’s called sarcopenia, and at RefinedMD we have Emsculpt NEO to help. Sarcopenia is generally described as the loss of skeletal muscle due to age and it is directly tied to loss of independence and functional decline for older adults. However, researchers have actually been debating for years to come up with a consensus diagnosis. We do know that we lose muscle mass, function, and strength with every year we get older after we hit a certain age (and increasingly so with every decade once we enter our thirties).

Scientists agree that sarcopenia is “multifactorial” and can be caused by a decline in activity, neurological decline, hormone changes, chronic illness, and more. When we are in our teens and twenties, it is relatively easy to build muscle and burn fat—that’s what our bodies are designed to do at that time. However, once we enter our thirties, building and keeping muscle (along with warding off unwanted fat) becomes a major challenge. Researchers recommend a healthy diet and exercise to address sarcopenia, but what if that’s not enough?

Building muscle at the gym takes a lot of time and work. It can be frustrating when you don’t see results, which can lead to giving it up for good. To properly build and sustain muscle growth, routine strength training is needed. If you’re looking to get back into caring for your muscles, it can be intimidating. If you’ve been a hardcore gym-goer for years, you might be at a plateau. No matter where you are on your health journey, keeping sarcopenia in mind can serve as a motivator to try new “modalities.”

Emsculpt NEO is one of them. Unlike switching it up from fixed weight machines to kettle bells or TRX, Emsculpt is a complement to workouts that requires zero effort on your part. The latest technology forces targeted muscles into 20,000 supramaximal contractions in 30 minutes. You can also schedule back-to-back sessions, such as Emsculpt NEO on the glutes followed by treating the abs. These types of contractions are the ones that cause muscle growth and strengthening, and the best part? Your body doesn’t know the difference. Whether you achieve 20,000 contractions via Emsculpt or through lunges, the results are the same: muscles that are bigger, stronger, and reduce sarcopenia.

Of course, when you have unwanted fat covering muscles, they aren’t going to show! We have long known that visceral fat around the stomach is the most dangerous, linked to a variety of conditions including heart disease and cardiac events. This is also the most stubborn fat to “lose,” especially since we can’t spot reduce through diet and exercise alone. Emsculpt NEO, unlike its predecessor “just Emsculpt,” is equipped with radiofrequency (RF) technology that literally melts away small amounts of fat while the muscles are being contracted. This is not a “weight loss” procedure, but rather a means of sculpting and toning the body.

Emsculpt NEO is best suited for those who are at or near their goal weight but want to take their strength to the next level. However, those at the start of their journey who want to get a jumpstart on fitness can also benefit from it. Ultimately, most people who want to build muscles also want to show off those gains, and that’s going to require sculpting with some contouring. Why just build muscle in 30 minutes when you can also burn fat?

Sarcopenia, the involuntary loss of skeletal muscle strength and mass, begins in earnest around age 40. It is estimated that up to half of our total mass is lost by the time we turn 80. That might seem far away for many of us, but what we do now can make a huge difference in our twilight years. Consider that muscle mass makes up 60 percent of overall body mass and it’s easy to see how the choices we make now can have severe consequences when we get older. Sarcopenia has been linked to chronic diseases, falls, a higher insulin resistance state, and even mortality Specifically, sarcopenia has strong ties to rheumatoid arthritis, particularly in women.

Researchers who published findings in the National Library of Medicine urge, “Sarcopenia remains an important clinical problem that impacts millions of older adults…interventions for sarcopenia continue to be developed with the most emphasis on exercise and nutritional interventions.” Diet and exercise are key, but there is more that you can do. Learn more about Emsculpt NEO and book your appointment by calling RefinedMD or completing the online contact form.