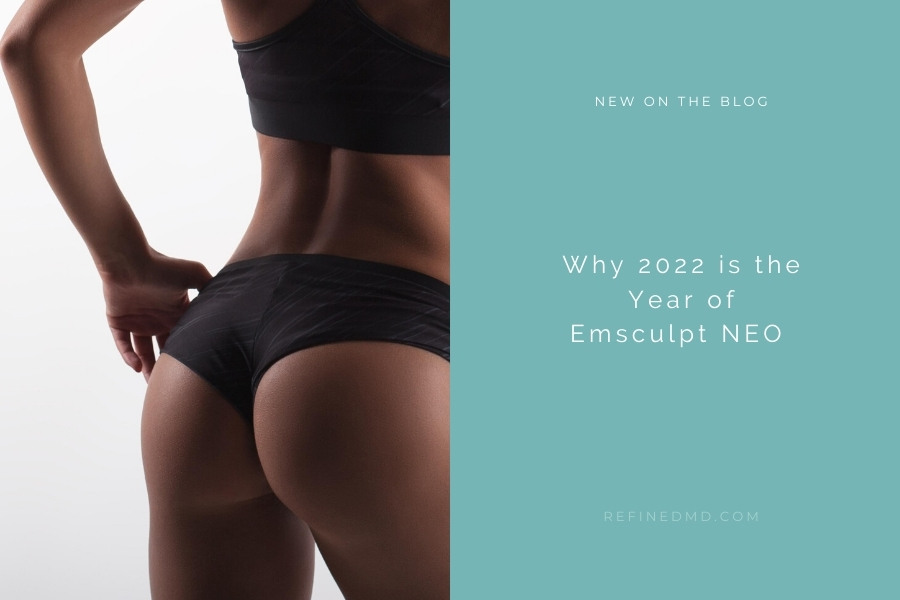 Real Housewives’ (and fitness/bodybuilding competitor) Teresa Giudice has credited Emsculpt NEO as a primary reason she is being compared to her 20-year-old daughter. Emsculpt NEO has been included in a list of how to get a perk booty at 55 by the Daily Mail. And now, Emsculpt NEO has made Marie Claire’s top 5 list of must-do beauty trends of the year. RefinedMD has always brought you the latest and greatest technologies, which is why we were quick to upgrade from Emsculpt to Emsculpt NEO. This second-generation device still builds muscle where—and only where—you want it, but now burns fat at the same time. No wonder it’s being called the secret to a surgery-free butt lift.

It doesn’t hurt that Emsculpt NEO is also very social media-friendly. If you haven’t tried it yet, you’ve surely seen it on your preferred platform, often connected to celebrities and star athletes. Emsculpt NEO can be applied to virtually any body part, and one of the most popular treatment areas is the bum (the abs are also in high demand). The difference between Emsculpt and Emsculpt NEO is that the high intensity focused electromagnetic (HIFEM) energy gets combined with radiofrequency tech for fat-burning along with muscle building. After all, what’s the point in having large muscles if you have fat hiding them?

Why Editor’s Say You Have to Try It

Marie Claire talked to leading doctors around the globe about Emsculpt NEO and the consensus is clear: it’s the most in-demand body contouring treatment available. As a company, Emsculpt is relatively young and just launched in 2018. However, the science behind it is fairly straightforward. Simply put, your muscles get bigger and stronger when they undergo the right amount of stress, which results in supramaximal contractions.

Our muscles are smart, but not too smart. When they are stressed, such as with a weight lifting routine or heavy labor, micro-tears occur. These are “good” tears that won’t bench you or cause serious pain (though delayed onset muscle soreness, or DOMS, is common and a sign that muscles are getting stronger). The muscles “learn” that they need to repair themselves to a bigger and stronger version to be able to handle similar stresses in the future. However, every person will plateau when it comes to traditional workouts. There is a limit to how much stress and, in turn, supramaximal contractions, our bodies can take—or at least that was the case until Emsculpt came on the scene.

Of course, just like with a gym routine, results aren’t immediate and that’s because results are real. Your muscles feel like you just did 20,000 lunges, crunches, or other such workout because they did! Now, the muscles and body need time to heal, repair, and get bigger and stronger. First-time Emsculpt NEO users typically enjoy individualized plans that include around 6 sessions spaced a few weeks apart (again, so muscles can repair in between appointments). After the first series is complete, maintenance sessions every six months are recommended.

The original Emsculpt was great for building muscle, but failed to do anything with the overlying fat. The new radiofrequency technology targets unwanted fat to dissolve the cells during the treatment. Emsculpt NEO is wholly non-invasive and very comfortable. There are no needles and there is no downtime besides the expected DOMS. Plus, the heat of Emsculpt NEO has been shown to further improve muscle-building by up to 25 percent! Melt away fat and get bigger muscles while you scroll through your phone, read a book, or catch up on your shows.

Emsculpt NEO is not a replacement for workouts, but it can be an incredible complement to a healthy lifestyle. Now is the time to experience for yourself what everyone on social is talking about. Contact RefinedMD today to learn more. Complimentary consultations are not available for every treatment, but you can learn more by calling the office, starting a chat, or completing the online contact form.