And Just Like That, Carrie Bradshaw Considers a Facelift 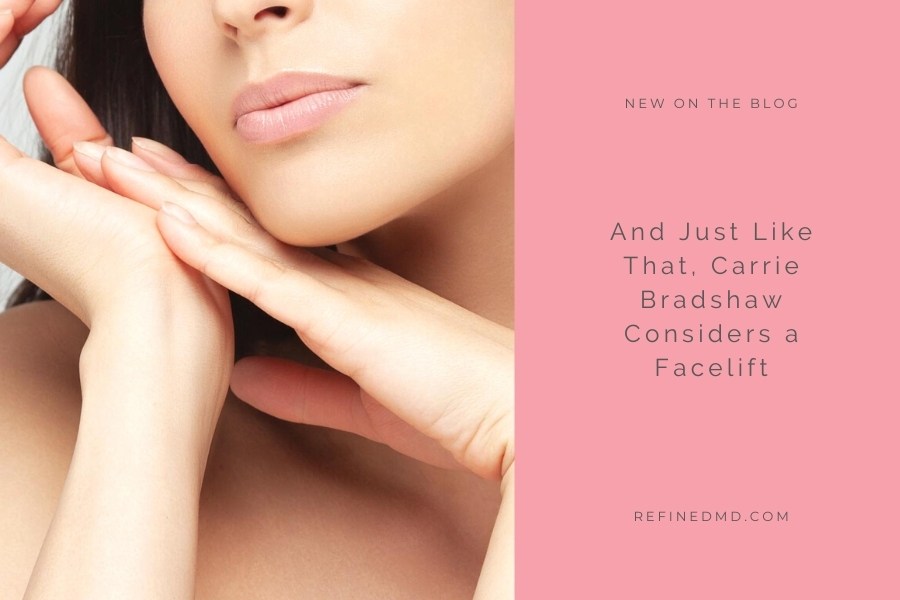 24 Feb And Just Like That, Carrie Bradshaw Considers a Facelift

Sex and the City’s reboot And Just Like That has garnered mixed reviews at best as we watch three of the four women we fell in love with tackle life and aging. In the sixth episode, Anthony Marentino drags Carrie along for his facelift consultation—where Dr. Paul David immediately asks Carrie what he can help her with rather than Anthony. At RefinedMD, double board-certified plastic surgeon Dr. Sudeep Roy wouldn’t make such a faux pas, but we do appreciate the kindness shown by the fictional surgeon once he’s corrected. Ultimately it turns out that Anthony is “hot” thanks to his good “Italian skin” and Dr. Paul David recommends mostly Botox for those angry elevens that are about to “turn into 12s.” But Carrie needs more.

As Dr. Paul David says, “Unfortunately, Mother Nature and Instagram are harder on women.” He goes on to describe how, as women age, they either become “hollowers” or “saggers” and dubs Carrie a “hollower.” This is indicative of loss of volume which might not cause the more severe skin laxity of a “sagger,” but will require a facelift or mini facelift along with fillers in order to correct. Dr. Paul David shows Carrie what she would look like after his recommendations, which “removes 15 years” and has her looking like she did when we first met her in the pilot episode (back when SATC had her breaking the fourth wall and talking directly to the camera). “Oh, I remember her,” Carrie says as she watches the virtual transformation.

In the end, Carrie declines the facelift because—as we know—she just lost Big (aka the last 15+ years of her life). Immediately post-grief is typically not the best time to consider such major changes, including plastic surgery. Plus, it probably wouldn’t bode well for the show if Carrie had chosen otherwise (besides the fact that the makeup team would be overwhelmed reversing her age by 15 years with every shooting). However, there are some great lessons from this episode.

For starters, Carrie is supposed to be 55. Dr. Paul David recommends a facelift or mini lift or even just fillers, stressing that it’s all up to her. There’s no pressure here and no pushing towards the most invasive procedure for a woman in her 50s. We are reminded that yes, indeed, being a fair-skinned woman does mean you are more likely to show signs of aging faster. We get to see what a fictionalized consultation looks like, though infused with the necessary touches of comedy the show demands. Ultimately, this episode shows a touch of reality when it comes to the world of plastic surgery. It’s something most people have at least thought about.

Is a Facelift for You?

Carrie was undeniably taken by getting a glimpse of what the suggested procedures could achieve. The virtual rendering looked natural, which is suggestive of the latest facelift techniques that address not just sagging skin but the changing underlying tissue that can make us look older. By complementing surgery with non-surgical options like Botox and fillers, the outcome is maximized. In fact, the best way to get the results you want is with a combination of procedures, which Dr. Paul David wonderfully lays out in his few short minutes on screen.

It is also worth stressing that the fictional surgeon was quick to tell his “real” consultation that a facelift wasn’t needed—in just those words. Offering up alternatives reveals how a reputable surgeon works with clients. This scene is representative of a fairly collaborative relationship between surgeon and patient(s). If you’ve been thinking about getting a consultation for a facelift or any facial plastic surgery, perhaps this episode gave you a little peace of mind.

Consultations for plastic surgery are informative and your space to get questions answered and ideas about what you can expect. You can learn more about alternatives if that’s what’s best for your goals or ways you can maximize procedures with other treatments or surgeries. For example, a facelift doesn’t address the upper half of the face—many patients opt for eyelid lifts and/or a brow lift for a full refresh. Schedule your consultation with Dr. Sudeep Roy at RefinedMD today by calling the office, or simply complete the online contact form.